Oxford prepared for life without Joiner, Williams as they enter 6A 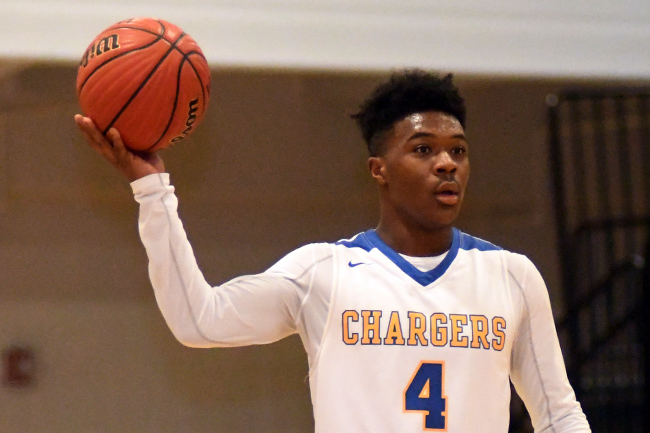 Oxford High's Hiram Wadlington, looking to pass against Ridgeland in MHSAA Class 5A playoff action in Oxford, Miss. on Tuesday, February 22, 2017, returns for the Chargers this season.

Oxford is without 74 percent of their offensive production from a season ago. Jarkel Joiner is now at California State Bakersfield with former Ole Miss head coach Rod Barnes and Terry Williams is with Jones County Junior College.

Life without arguably two of the best players to come through their program would scare most teams moving forward. The Chargers are prepared.

“They’ve see Terry and Jarkel on Twitter enough they know they aren’t walking back through that door,” Oxford head coach Drew Tyler said with a laugh. “Last year it took a special group of players to play and to be on a team with Joiner and Williams last year. That was Oxford basketball. …This year they know they kind of got to do it by committee.”

The cupboard is not completely bare for Tyler — who is entering his 21st season with Oxford — as returning players Drew Bianco, Hiram Wadlington and J.J. Pegues lead a crop of players who bring experience at the highest level from 2016.

Oxford fell to Laurel in the MHSAA Class 5A state semifinals in March.

“We’ll have highs and lows,” Tyler said. “We’ll take a loss here and there on the chin. It’s just about how we ‘season’ early in the season to get us ready for January and 6A play.”

This is the first run through Class 6A for the Chargers (1-0) who defeated Belmont in their season opener as part of the Calhoun City Classic.

The offense will be run through Wadlington at the guard with Bianco and Pegues providing support out-wide and down below at the post. The expectations for Wadlington, who scored only 22 points a season ago, as he will try and replace the role of Williams who controlled play on the court.

“I see our quarterback on the floor as Hiram Wadlington. Absolutely,” Tyler said. “I think we’ve two of the tougher student-athletes in 6A in Hiram Wadlington and Drew Bianco. There’s so much me and (assistant) coach (Tyler) Reed because it trickles down from Hiram and Drew. We’ll win games this year that maybe we’re not the most talented team. But, we’re the toughest team and we’re a closer knit team.”

After returning to basketball last season, Bianco became a spark plug for the Chargers. Behind Joiner and Williams, Bianco was the third-best scorer with 232 points. Pegues was next on the list with 232 points.

The Chargers get their leading rebounder back from last year as Bianco pulled down 243 board.

“(Bianco) loves basketball. He could be labeled as a gym rat. He’s spent so many hours shooting the basketball,” Tyler said. “J.J. was a ninth-grader who started last year and has a lot of varsity minutes already under his belt. Once he gets in that basketball mode mode and if he can put it in that fourth, fifth-gear he can do a whole lot.”

The football season just concluded for Oxford on Friday. Tyler will have his team at full strength beginning Tuesday when Oxford hosts Calhoun City in their home opener. While Wadlington and Pegues get into basketball shape young players such as sophomores Tykel Owens, Kylan Blackmon and Cade McKellar.

Owens saw varsity minutes his freshman year, playing in 14 games and scoring 42 points and pulled down 57 minutes. Blackmon played in 14 games but battled with injuries throughout the season while McKellar is a transfer from Magnolia Heights. Tyler noted McKellar will share time at point guard with Wadlington.

Tyler is adding another senior to his roster this season with the returing Jaquan Webb. After playing his freshman season Webb did not play basketball during the 2015, 2016 seasons.

“He probably had the best summer out of everybody because he was there,” Tyler said of Webb. “He bought in and it was instant senior leadership.”