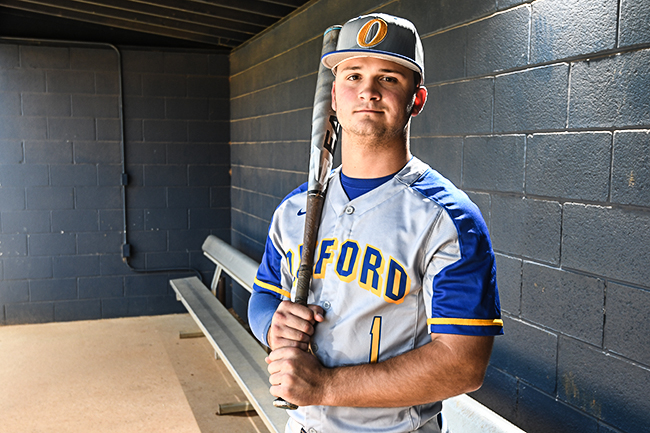 For Drew Bianco it was always just about LSU.

The Oxford High senior signed with the ‘Bayou Bengals’ on Wednesday, committing to play baseball at Alex Box Stadium for at least a couple seasons beginning 2019.

Bianco has been an all-around athlete at Oxford. Playing baseball, basketball and even football — until an injury in 2015 sidelined from the sport for good.

But in the Bianco houshold it is about baseball. Always has been, always will be.

“It means a lot. Just growing up in a baseball family and everything and competing with my brothers,” Bianco said. “I love all my sports but baseball is probably my favorite. It’s probably what I’m best at and everything.”

Drew is the third of four sons to Mike and Camille Bianco. His older brothers Michael and Ben played baseball at Oxford. Sam, the youngest of the four Bianco brothers is a sophomore infielder for the Chargers.

Mike is entering his 18th season as head coach of the Ole Miss baseball team.

Baseball is in their blood.

Drew had interest from LSU beginning the summer of his ninth grade season. The recruiting process kicked into gear his sophomore season when the Tigers came to watch him play at Oxford. A visit was next, which was quickly followed by an offer.

At the time, Andy Cannizaro was the LSU hitting coach and recruiting coordinator and was heavily involved in Bianco’s recruitment. In the fall of 2016 Cannizaro was announced as the newest head coach of the Mississippi State baseball program. He replaced John Cohen, who took over the role of athletic director at MSU.

The departure of Cannizaro from Baton Rouge was not a deal breaker for Bianco. It was always about LSU.

“(Cannizaro) and (LSU head coach Paul) Maineri were both in the room when they offered me,” Bianco said. “It was tough when he left. But, I didn’t just commit for one coach. I committed to LSU. I love coach Cannizaro and we still have a good relationhip. But, I know where I want to be and that’s LSU.”

Indiana and Louisville — where Ben is a freshman on the team — were other schools showing interest. But it was always LSU.

Anyone who is familiar with Southeastern Conference baseball or just Ole Miss and LSU know of Mike Bianco and his history with the Tigers. A catcher for two seasons (1988-89) followed by a stint as an assistant coach at LSU from 1993-97 made him a household name among the Tigers’ baseball community.

There are still family connections in Baton Rouge with Drew’s godparents and his mom’s sister living there.

When Bianco took the job at Ole Miss in 2000 he made a decision with his wife that none of their kids would play for him. The decision not solely centered around baseball.

“We always wanted them to have an experience like I did,” Mike said. “Where you go somewhere and you you’ve got to make a team and got to grow up and you gotta live and get an education. I think that’s what college is all about. We wanted them to experience that. We didn’t want them to come (to Ole Miss) because of that.”

When the two find themselves sitting in opposite dugouts for the first time the stress will not be with father and son on the field but in the stands.

“It probably will be for my mom,” Drew said. “She’s panic attack at every Ole Miss baseball game. We make jokes about it all the time and how fun it’s going to be. But, at the end of the day it’s just baseball games. They’re still my parents. I hope I win and he’s hoping he wins. So, we’ll just see what happens.”

There is still one season of high school baseball yet to be played for Bianco before he heads to Baton Rouge.

On the heels of three consecutive appearances in the Class 5A state championship series — winning in 2015 and 2016 — the Chargers enter Class 6A for the first time with aspirations getting back to Trustmark Park in Pearl.

Bianco, the reigning EAGLE Player of the Year, has been a perennial shortstop for Oxford head coach Chris Baughman.

“We’ve had one other (Bianco) that has started since their freshman year and that was Michael,” Baughman said. “(Drew) is just kind of a rock out there. He’s serious when he needs to be serious. He provides relief when I have to be serious. More than anything those guys look to him to lead.”