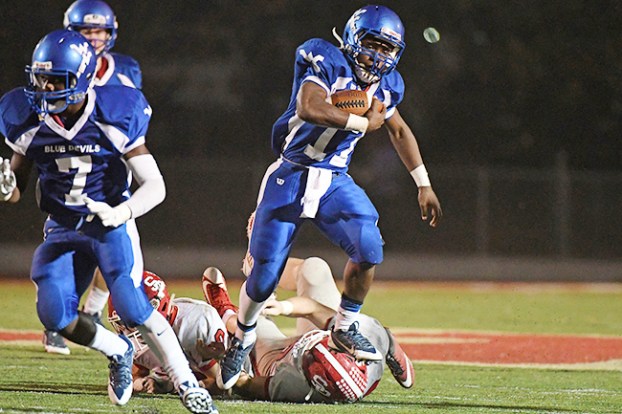 Brad Embry is very familiar with this week’s opponent’s quarterback. He knows how good he is. In fact, he helped facilitate a postseason award for him.

Yazoo County’s Kenny Gainwell was named Mr. Football for Class 3A by the Mississippi High School Activities Association and Mississippi Association of Coaches in Clinton on Wednesday.
Embry was in attendance and a part of the meeting that picked Gainwell for the distinction.

“It’s just rather ironic, isn’t it,” Embry laughed. “That’s what I told them in the meeting. I said, ‘I don’t know what to say about this.’ I don’t know if that bodes well, but we’re ready. We’ll have a game plan.”

Water Valley (8-4) and Yazoo County (11-0) square off in Yazoo City on Friday in a second-round matchup of the Class 3A playoffs (7 p.m., 105.5 FM). The winner will advance to next week’s quarterfinal round against the winner of North Pontotoc and Houston.

The Blue Devils find themselves against the undefeated Panthers after mounting one of the more bizarre comebacks, which also took 24 hours to complete.

After falling behind 14-0 to South Pontotoc early in the first quarter of last week’s first round, inclement weather postponed the game and forced the two teams to have to resume on Saturday night at Lafayette High School.

Once the game resumed and South Pontotoc jumped out front 22-0, Water Valley responded with 50 unanswered points to advance.

“We came back overnight and talked about it,” Embry said. “We’ve got a great group of kids. We really do. They listen is the main thing. I was really proud of how we played and how we didn’t lose focus.”

As for the game itself, the Blue Devil defense will have their work cut out. Gainwell — selected to the Mississippi roster for the Mississippi-Alabama All-Star game — is deadly with his feet.
Gainwell has thrown for almost 800 yards and eight touchdowns, but on the ground, he has rushed for 1,430 yards and 25 touchdowns.

Defensively, Yazoo County has held opponents to 8.1 points per game. Charleston put up the most points against the Panther defense with 22 in a losing effort for the Region 3-3A title on Aug. 26.
Water Valley is averaging 37.4 points a game.

“It starts with Kenny Gainwell,” Embry said. “He’s a great player and then he’s got a lot of good players around him as well. Solid on both sides of the football and well coached. It’s a challenge, but anytime you’re playing in the second round of the playoffs, you’re going to play a good football team.”

Water Valley storms back, defeats South Pontotoc to advance in 3A playoffs

Water Valley did more than win their playoff game against the South Pontotoc. Fifty unanswered points and a 24-hour postponement... read more