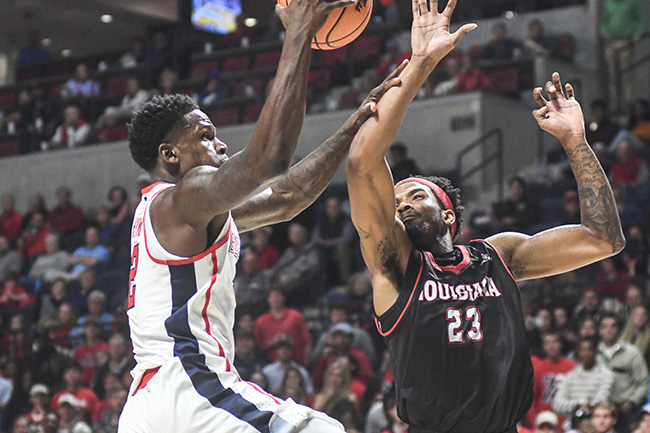 Ole Miss overcame a sluggish start with a strong second half, pulling away from Louisiana-Lafayette for a 94-76 win in the teams’ season opener Friday at The Pavilion.

Terence Davis led five Rebels in double figures with 21 points. Deandre Burnett scored 17 points, Marcanvis Hymon had a double-double with 12 points and 13 rebounds, Devontae Shuler had 14 points and Breein Tyree added 10 for Ole Miss, which outscored the Ragin’ Cajuns 54-34 in the final 20 minutes.

The Rebels (1-0) trailed by as many as 10 in the first half against a Lafayette team with seven of its top eight scorers back from a 21-win team, missing their first six 3-pointers while going just 8 of 16 from the free-throw line and committing seven turnovers in the first 20 minutes.

“Louisiana-Lafayette’s a good team, and we knew that coming in,” Ole Miss coach Andy Kennedy said. “They challenged us early. I thought we were out of sorts a little bit in the first half.”

But Ole Miss hit six of its final seven shots from the field to trim the deficit to 42-40 at the half before taking over. A 3-pointer from Shuler — one of four treys for the true freshman — put Ole Miss ahead for good with 13:35 left before back-to-back layups from Davis started a 12-0 run that put the Rebels up 70-57.

Cedric Russell, who had 15 points for Lafayette (0-1), hit back-to-back 3s to trim Ole Miss’ led to 72-66 with 7:40 remaining before being assessed a technical foul for jawing with Ole Miss students on his way back down the court. Davis hit both free throws, and the Rebels continued to build their lead from there in front of 8,302 fans — the largest crowd for an opener at Ole Miss in the modern era (last 20 years).

Ole Miss held Lafayette to 36 percent shooting for the game. The Ragin’ Cajuns made just four of their final 13 3s after starting 4 of 10 from deep.

“They were making shots early, we were late on rotations, and we just had to pick up the pace,” Hymon said.

Burnett (13), Shuler (11) and Davis (12), who also had seven rebounds and four assists to negate four turnovers in 27 minutes, combined for 36 points in the second half. The Rebels shot 51 percent from the floor in the second half and hit on 13 of their final 15 free throws while finishing plus-8 on the glass.

“I didn’t think (Davis) was very good early, and he was sitting over by me for a long time,” Kennedy said. “I wanted him to get his mind right. I thought he was forcing some action. I thought Breein had moments with Dre, Markel (Crawford) and Devontae Shuler.

“We settled in in the second half and was not only able to be more efficient offensively, but I thought defensively we really locked in.”

Ole Miss will return to action Monday against Eastern Kentucky. Tipoff from The Pavilion is set for 5:30 p.m.

Watch Kennedy talk about his team’s opening win in the video below.