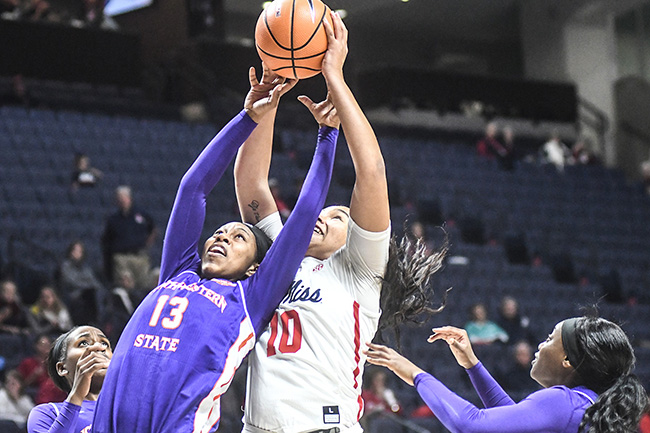 Ole Miss’ women’s basketball team didn’t have much trouble notching its first win of the season.

Madinah Muhammad had a game-high 27 points, freshman forward Promise Taylor had 13 points in her Ole Miss debut and the Rebels cruised past Northwestern State for a 75-44 win Friday at The Pavilion. Shandricka Sessom added 12 points for the Rebels.

Ole Miss (1-0) grabbed its first double-digit lead at 32-22 midway through the second quarter and added on from there. Muhammad finished 9 of 13 from the field, 4 of 7 from 3-point range and 5 of 6 from the free-throw line while also dishing out a game-high eight assists.

The 6-foot-5 Taylor was 5 of 6 from the field and pulled down four rebounds as part of a dominant night on the interior for the Rebels, who often beat the Demons off the bounce to outscore Northwestern State (0-1) 32-4 in the paint. Ole Miss was also plus-4 in rebounding margin, including a 31-21 edge on the defensive end.

“I think it’s going to be like that a lot when you’ve got Muhammad and Sessom that really get to the paint and score the basketball,” Insell said. “Promise Taylor’s one of the best big kids in the country. … When you’re 6-6′ around the basket and you’ve got Shelby Gibson in there that can score around the basket, it’s hard to defend.”

“Thought our defense was pretty good,” Insell said. “We just told them hard deny out (on the perimeter) and make them cut backdoor, and eventually they’re going to turn the ball over and won’t get the backdoor. Our kids did a good job of that.”

Ole Miss will stay at home Monday with a 7:30 p.m. tip against Kennesaw State.