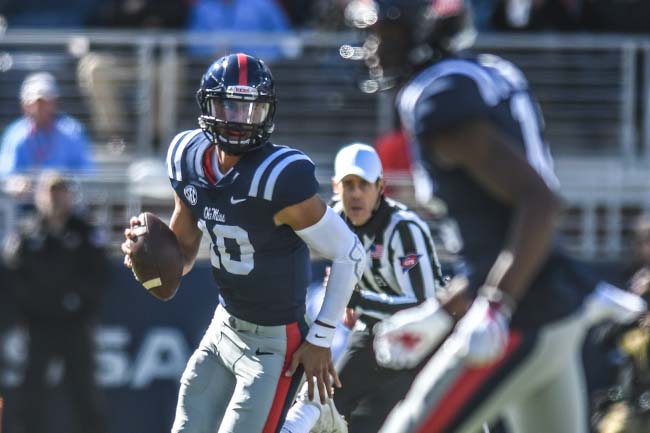 Jordan Ta’amu made it sound so simple.

“I just had to stay focused and do my job,” Ta’amu said. “I knew my o-line had my back and my receivers had my back. We just had to drive down there and score, so that’s what we did.”

Ask anyone who knows Ole Miss’ quarterback, and they’ll say this is what Ta’amu is — a calm, collected personality even amid the most unnerving situations. From his days playing high school ball in Hawaii to junior college to his first taste of life at college football’s highest level, it’s always been hard to shake him.

“It didn’t matter if it was the end of a game, the first quarter of a game or practice,” said Joe Forchtner, who coached Ta’amu the previous two seasons at New Mexico Military Institute. “His demeanor was always the same. It’s really tough to rattle that kid.”

But this wasn’t junior college.

This was Ta’amu’s first road start in the Southeastern Conference and only his second ever in place of the injured Shea Patterson in what many consider college football’s toughest league. Ta’amu and the Rebels’ offense had to have a 71-yard touchdown drive with just 2 minutes, 15 seconds left if Ole Miss wanted to get out of Kentucky with a win after Bennie Snell’s 1-yard scoring plunge gave the Wildcats a 34-30 lead last Saturday.

Fourteen plays later, Ole Miss was in the end zone on Ta’amu’s fourth and final scoring toss of the night — a 7-yarder to DK Metcalf that came with just 5 seconds left and ended the Rebels’ two-game losing streak. Then came that explanation from Ta’amu about what his mindset was heading onto the field to begin the do-or-die drive, like he’d done it so many times before.

The same could be said for Ta’amu’s first two weeks as the Rebels’ signal caller.

The 6-foot-2, 212-pounder took over the SEC’s top passing offense and has picked up where Patterson left off, becoming the first Ole Miss quarterback to ever throw for 750 yards in two straight SEC games. He’s completing nearly 72 percent of his passes for 828 yards and four touchdowns against one interception on the season while adding 136 yards and two scores on the ground.

Yet Ta’amu’s path to Ole Miss was about as subdued as he is.

He accounted for 2,171 yards of offense his senior season at Pearl City High off the mainland, but Ta’amu didn’t receive any FBS scholarship offers. NMMI was one of just two junior colleges to offer him, and that was after some of the Broncos’ coaches watched Ta’amu throw while recruiting another player from his high school.

Forchtner believes a somewhat unconventional delivery — Ta’amu has a lower arm slot and release than most quarterbacks — scared most schools away while part of him thinks Ta’amu simply fell through the recruiting cracks. NMMI was the beneficiary as Ta’amu threw for 3,014 yards and 32 touchdowns while also rushing for 328 yards and seven more scores in his only season as the Broncos’ full-time starter last year.

“Hopefully if we can get a good player that doesn’t have any offers, we can get lucky like that,” Forchtner said. “And I’ll take getting lucky with a kid like that any day.”

Needing a backup to Patterson, who took over as the full-time starter this season with Chad Kelly out of eligibility, Ole Miss recruited Ta’amu, putting him through “as thorough of an evaluation as I’ve ever seen” for a quarterback, Forchtner said.

Ta’amu enrolled in the spring, quickly secured the backup job and waited his turn, which came earlier than expected when Patterson tore his PCL in the Rebels’ seventh game against LSU. In his first extended action of the season, Ta’amu led a drive at the end of the first half that resulted in a field goal before leading a touchdown drive on the Rebels’ final possession.

In his first start a week later against Arkansas, Ta’amu accounted for 444 yards and ran for two scores before completing 31 of 40 passes for a career-high 382 yards with no turnovers against Kentucky. He’ll get his next chance Saturday (11 a.m., SEC Network) against a Louisiana defense that’s 95th nationally against the pass (252 yards per game).

“I’ve seen he can throw the ball, but I didn’t know he had that much talent,” defensive tackle Benito Jones said.

Even as the roars of the Kentucky faithful grew louder with each second that melted away on the Rebels’ final drive, Ta’amu’s composure trumped it all. He completed eight of 11 passes and added a 10-yard run to get the Rebels close before finding Metcalf for the game-winning score.

“Jordan’s calmness from the time he gets up to the time he goes to bed impresses me,” offensive coordinator Phil Longo said. “He’s like this the whole time. His poise is a definite asset when he’s out there running the offense.”

Said Ta’amu, “Just being me and trusting God. He’s going to carry the way for me. Just go out there and perform.”

The way he’s doing that isn’t surprising everybody.

“I thought coming out and we all thought as a staff that he could play anywhere in the nation and be successful. I thought personally he could start anywhere,” Forchtner said. “I think he’s doing a pretty dang good right now, so I don’t know if the expectation should be much higher than what he’s doing right now. This is what we thought he could do.”