Amid all the noise, Ole Miss enjoys stress-free day in runaway win 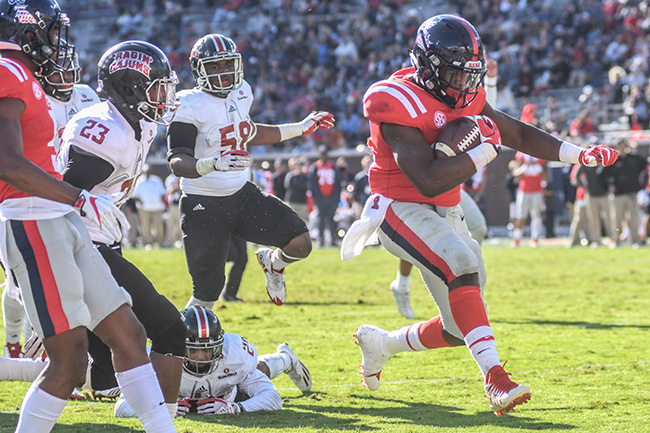 No worries. No stress. No drama.

At least on the field.

Saturday was a different kind of day for Ole Miss. The Rebels got back to .500 overall on the season with a 50-22 win over Louisiana-Lafayette on a cool Saturday afternoon at Vaught-Hemingway Stadium that was as convincing as the final score indicated.

Whether it was through the air or on the ground, Ole Miss didn’t have a whole lot of trouble slicing up a Lafayette team that came in no better than 96th nationally in passing defense, total defense or scoring defense. Ole Miss was up 21-0 after its first 15 plays, had another touchdown a few minutes later and led 35-7 after its first five possessions.

Jordan Ta’amu continued to show the Rebels’ offense is in good hands even in the absence of Shea Patterson, completing his first nine passes en route to a 28-for-36, 418-yard day through the air while also running for scores of 1 and 8 yards.

A.J. Brown did A.J. Brown things against an overmatched Lafayette secondary. The SEC’s leading receiver put a Ragin’ Cajun defender on skates to finish off his first score — a 31-yard catch and run — hauled in a 27-yard touchdown early in the second quarter and caught 12 more passes throughout to tie Laquon Treadwell’s school record for receptions in a game. Jordan Wilkins needed just 14 carries to get 124 yards and a touchdown while Eric Swinney got in on the fun with a 10-yard scoring run late.

UL-L quarterback Jordan Davis ran for a pair of fourth-quarter touchdowns, but they were of little relevance. The only intrigue late was whether Brown would catch one more pass to pass Treadwell in the record books in a game where the Rebels notched their largest margin of victory in a season that’s included a stunning 38-37 loss to Arkansas (the Rebels led 31-7 at one point) and a euphoric 37-34 win at Kentucky in the previous two games.

Of course, it happened amid the noise that continues to blare around the program off the field. The Committee on Infractions will issue its final ruling on the Rebels’ NCAA investigation any day now seeing how the end of the committee’s typical six-to-eight week window to deliver verdicts after cases are heard came last week, but exactly when that ruling will come — and what it will consist of — is anybody’s guess.

Chatter is also rampant about who Ole Miss’ next coach is going to be, but the Rebels need NCAA clarity one way or the other before athletic director Ross Bjork can realistically move forward with his search. South Florida’s Charlie Strong, Memphis’ Mike Norvell and UTSA’s Larry Wilson are some of the names that have been linked to the job, but if the Rebels are hit with more scholarships reductions or worse — a multi-year bowl ban — what type of candidate will Bjork be able to lure to take over what could possibly be a rebuilding project in the dog-eat-dog Southeastern Conference?

Speaking of coaches, where does Matt Luke stand? Luke may be an underdog at this point with the school hiring the firm Turnkey Search to help, but Bjork said recently the Rebels’ interim coach is “absolutely” still in the mix for the permanent gig.

It’s been ugly at times with three of Ole Miss’ league losses coming by a combined 100 points, but Luke has managed to keep a group of players that’s had every reason to pack it in fighting. The Rebels have their second winning streak of the season after Saturday’s rout and still have a chance at a winning season if they can knock off Texas A&M and Mississippi State in their final two games. Has it helped Luke’s chances?

Ole Miss’ current coaches and players can’t answer any of those questions, leaving them to control what they can control on the field. For a day at least, the Rebels did that as well as they have all season to enjoy a relaxing one.