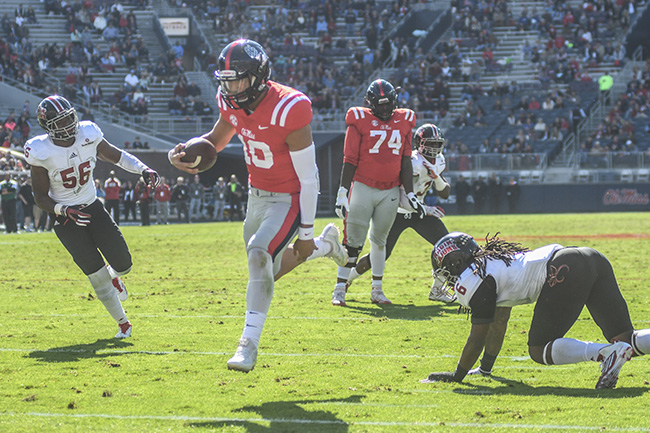 Louisiana-Lafayette came into Saturday’s game with one of the worst defenses in the Football Bowl Subdivision.

Ole Miss didn’t waste any time picking at those wounds.

The Rebels scored on each of their first five possessions en route to a convincing 50-22 win at Vaught-Hemingway Stadium. The Rebels found the end zone quickly, too, with none of those scoring drives lasting more than eight plays.

UL-L was 120th nationally in both scoring defense (37.4 points allowed per game) and total defense (474.6 yards per game), and Ole Miss had nearly reached both of those totals by the time Ta’amu ran for a 1-yard score to make it 35-7 midway through the second quarter, putting the Rebels on the way to their largest margin of victory this season.

“We talked about coming out and trying to use our tempo and playing fast,” Ole Miss interim coach Matt Luke said. “We felt like part of that was they were really good on the defensive line, their first unit. We felt like there was a little bit of a drop-off on their second unit, so we wanted to make sure we utilized our tempo early and stay balanced.”

Ta’amu, who accounted for all five of the Rebels’ first-half touchdowns, completed his first nine passes as the Rebels racked up 441 yards before halftime while averaging 9.2 yards per play. The running game didn’t get much resistance from the Ragin’ Cajuns either with Ole Miss ripping off 6.2 yards a carry in the first two quarters.

Ta’amu, who made his third career start, said part of that is a personal comfort level that continues to grow with each passing week. He finished 28 of 36 through the air for 418 yards.

“Just reading defenses quicker and knowing where to throw the ball,” Ta’amu said. “Getting better with my ball placement and then making my reads in the run game.”

Ole Miss’ first punt didn’t come until 38 seconds left in the second quarter. The Rebels kept their offensive momentum going out of the locker room with a seven-play, 80-yard scoring drive capped by Jordan Wilkins’ 3-yard scoring run to give Ole Miss its biggest cushion of the day.

Not everything was perfect. Ta’amu threw an interception early in the fourth quarter, snapping his string of 84 straight pass attempts without one, that turned into a 31-yard touchdown run by Lafayette quarterback Jordan Davis, who ran for two second-half scores against an Ole Miss defense that gave up 238 of the Ragin’ Cajuns 427 total yards after halftime.

“We were just trying to get out of the game there and trying to get some people to play,” Luke said. “Wanted to finish the game a little bit cleaner but overall very happy with the win.”

Sophomore wideout A.J. Brown continued his breakout season Saturday by tying one school record and inching closer to another.

“Just beating my man one-on-one,” Brown said of his performance. “Every time my number got called, I just made a play.”

Wide receiver Van Jefferson went to the locker room before halftime with a brace on his left arm and didn’t return.

Jefferson was slow to get up after taking a hit following his final reception midway through the second quarter. He eventually jogged to the sideline while holding his arm. Luke said immediately after the game he didn’t know the extent of Jefferson’s injury but would find out Saturday night.