Ole Miss gets back to .500 in rout of Louisiana 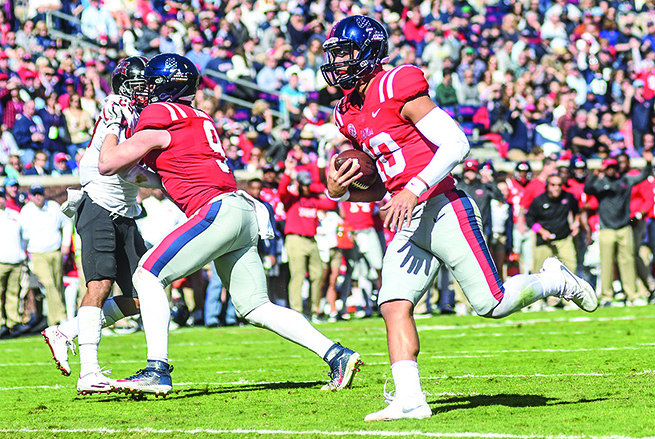 After defeating Kentucky in the final seconds last week, the Rebels used that momentum to dominate Louisiana in their match up on Saturday with a 50-22 win inside Vaught-Hemingway Stadium.

In his third career start, Ta’amu accounted for five of the Rebels’ seven touchdowns. He threw for 418 yards and three touchdowns while rushing for two touchdowns and 13 yards on seven carries.

The only blemish on the day was Ta’amu throwing his first interception in the last eight quarters when Louisiana’s Chaziere Malbrue picked him off in the fourth quarter.

The game was put out of reach quickly when the Rebels scored touchdowns on their first five drives.

It was another career day for receiver A.J. Brown. The Starkville native caught 14 passes — tying Laquon Treadwell for a single-game record — for 185 yards and two touchdowns. Damarkus Lodge finished with 95 yards and a touchdown on three catches.

Last week’s hero, D.K. Metcalf, had only one catch for seven yards.

The ground game picked up with Jordan Wilkins recording another 100-yard game. Wilkins rushed for 124 yards and a touchdown on 14 carries. Eric Swinney also had a touchdown along with 12 yards on six carries.

Louisiana (4-5) managed 437 yards of total offense against a Rebel defense that struggled with the run at times, once again. The Cajuns rushed for 228 yards and three touchdowns while starting quarterback Levi Lewis threw for 166 yards. Louisiana finished with 209 yards through the air.