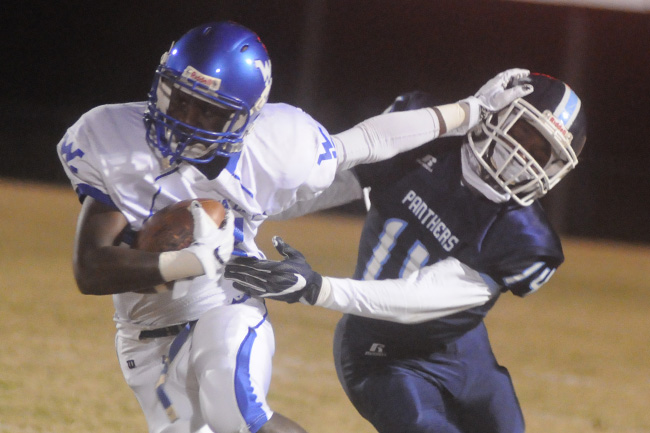 YAZOO CITY — If Water Valley could have one turnover and the final four minutes of the first half back. Friday night’s result might have been a different story.

Instead, Yazoo County scored 16 points in the final 4:12 of the second quarter to defeat Water Valley 35-7 in the second round of the Class 3A playoffs at Yazoo County High School.

The Panthers —  who improved their undefeated record to 12-0 — will travel to Houston for Friday’s quarterfinal round.

For Water Valley (8-5) it is now a time to reflect on a game, and a season, that resulted in near misses.

On the second play of the second quarter, Water Valley had a first and goal at the Panther 10-yard line. Confusion before the play and a early snap by the center created a Blue Devil fumble. Yazoo County recovered but were forced to punt, still the Blue Devils knew they left points on the field.

With the game still 7-0 in favor of the Panthers, Yazoo County running back Cherokee Adams scored on a seven-yard run to make it 14-0 at the 4:12 mark of the half. A Blue Devil punt later gave the Panthers the ball back and they scored once again, this time a nine-yard run by Devarrio Sanders to make it 21-0 and only 35 seconds left in the half.

It went from bad to worse for the Blue Devils as Martavious Rockett was tackled in the end zone for a safety by the Panther defense to put Yazoo County up 23-0 at halftime.

The plan of attack was simple for Water Valley’s defense — stop Kenny Gainwell. The Panther quarterback was named Mr. Football for Class 3A by the MHSAA/MAC earlier in the week and was the lethal weapon for Yazoo County.

For the most part Water Valley succeeded in executing their plan. Gainwell was held to 45 yards on the ground on 10 carries but did score two rushing touchdowns. Through the air he was 10-for-18 for 143 yards and a touchdown.

“I think the kids took the game plan well of trying to take (Gainwell) out,” Embry said. “Certain things we did to try and slow him (down). I didn’t think we were going to stop him but what we did was about as well as I think you can do.”

Offense was hard to come by for Water Valley as turnovers killed promising drives. Along with the fumble inside the red zone, Kenterrious Rucker also had a fumble in the fourth quarter at the Yazoo 47-yard line.

The only score of night for the Blue Devils came in the final minute of play. Ty Varner — who returned from missing two weeks with a shoulder injury — hit Rockett for a five-yard touchdown pass with 44 seconds remaining.