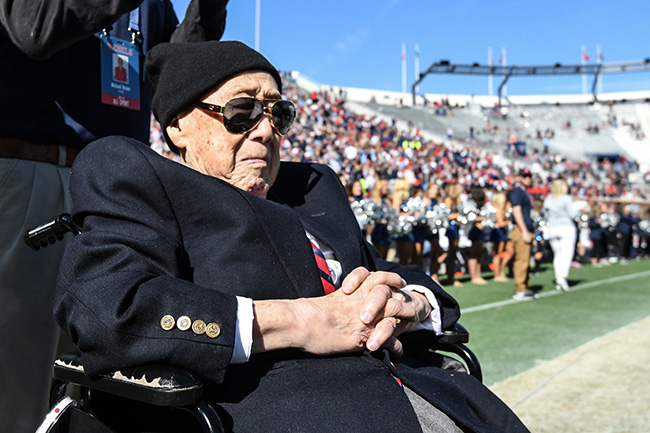 Vietnam War veteran Richard Strong said while he’s a fan of the Ole Miss Rebels, he’s never been to one of their games, let alone down on the field at Vaught-Hemingway Stadium.

However, Saturday he and three other fellow veterans and residents of the Mississippi State Veterans Home in Oxford did just that during the halftime show when the Ole Miss Rebels took on Louisiana-Lafayette Ragin’ Cajuns.

The special veterans recognition was one of the several events held last week by the Ole Miss Student Veterans of America.

Each veteran represented their respective military branch. Strong, from Memphis, represented the U.S. Marine Corps where he served in the engineering company from 1965-1967.

“I thought it was a blessing,” Strong, 72, said about being selected to go on the field during halftime.

For retired U.S. Navy World War II veteran Linn “Pap” Pang, it was the second time he was invited to the field by Ole Miss. The last time was two years ago when he turned 103 years old and was honored as the Ole Miss Hero of the Week during the Vanderbilt game.

Pang served in the U.S. Navy for four years working with Naval Aviation. He returned to the states three days before the end of the war where he battled tuberculosis for several years before moving to Clarksdale.

Now, 105, Pang said he looked forward to going back on the field and that he often enjoys watching football.

“What else is there for me to do,” he said laughing.

During the halftime show, a flyover took place after the national anthem and the Ole Miss Marching Band played songs from the various military branches.

U.S. Army Vietnam War veteran Charles Swenoske, known by most at the veterans home as “Big Elvis,” served in Vietnam as a missile man from 1965-1967 and is 72 years old. He’s originally from Milwaukee and has lived in Oxford for 12 years.

He said he’s a fan of Ole Miss and Mississippi State.

“I think it’s pretty good to be asked,” he said.

Leslie Siltman, 72, retired from the U.S. Air Force, joined Strong, Pang and Swenoske Saturday but was unavailable last week for an interview.

Avoid traffic jams Saturday and ride the shuttle to…