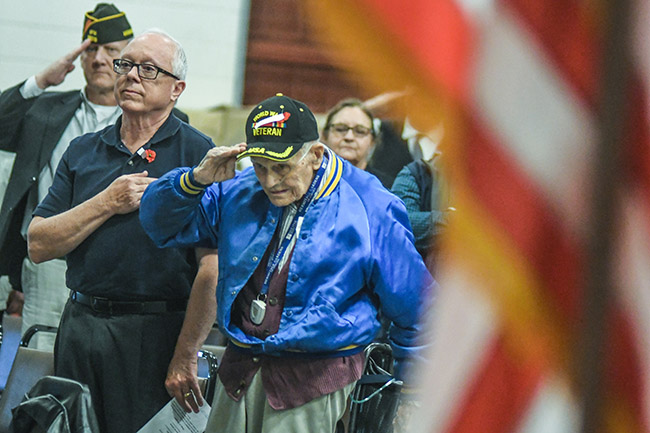 Joe Singletary’s voice cracked with emotion when trying to speak after being recognized by the American Legion on Friday during the annual Veterans Day Ceremony for his work with veterans at the Mississippi State Veterans Home in Oxford.

“I am honored and appreciate this so much,” he said. “I feel like when I”m working, those guys are my bosses.”

Several awards were handed out during the ceremony that was held at the National Guard Armory, recognizing veterans and civilians for their outstanding contributions to veterans in Lafayette County.

Tony Deal, Jason Plunk and Joe Dickey were recognized and thanked by the three veteran organizations responsible for day’s event – Veterans of Foreign War, American Legion and the Disabled American Veterans – for their roles in holding the annual Ride for the Veterans Poker Run that raised $18,000 in April that goes toward helping local veterans.

“We are in process of getting our 501c3, a nonprofit status so we can do more to help veterans at the state home, in Oxford and Lafayette County and at the University (of Mississippi),” Dickey said.

Dickey was also named Veteran of the Year by the American Legion.

“This means a lot to me,” Franklin said. “ … I’m honored to be a part of this great community here in Oxford.”

The ceremony kicked off with music by Oxford Middle School students and the Oxford Police Department Honor Guard presented the colors.

Mayor Robyn Tannehill and Lafayette County Board of Supervisor President Jeff Busby welcomed the group of about 75 people to the ceremony and thanked the veterans for their service. Pastor Andrew Robinson of Second Baptist Church gave the invocation and the benediction.

Sen. Gray Tollison stepped in at the last minute to be the guest speaker for the event after Retired Naval Commander Joe Skinner fell ill before the event.

“I was honored to be asked,” Tollison said. “Your service and sacrifice have kept our country free.”

“You never gave up on us, and we won’t give up on you,” Tollison said.

VFW Commander Bill Arnold said he always appreciates when people come up to him in Walmart and thank him for his service.

“But what means even more to me is when a child thanks me for my service,” he said at the ceremony. “That means there are parents or grandparents doing their job to make sure we never forget what the veterans did for us.”

The ceremony concluded with the OMS Band performing the theme song for each branch of the military as the veterans who served for that branch stood as the song played.

Avoid traffic jams Saturday and ride the shuttle to…