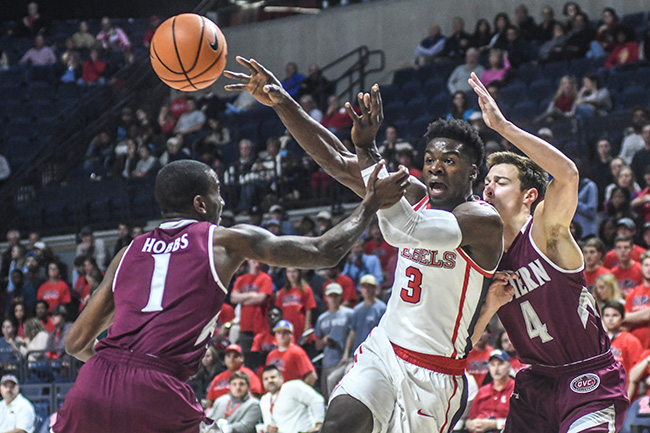 Asked who the president was the last time Ole Miss’ men’s basketball program had more overall wins than losses, Dwight D. Eisenhower never crossed the mind of the Rebels’ 49-year-old coach. It’s understandable since Eisenhower was in the Oval Office some six decades ago, but Kennedy still had his reasons for being disappointed in drawing a blank.

“I was a history major,” Kennedy said. “I should know that.”

Ole Miss got there Monday night as another balanced scoring effort among the backcourt helped the Rebels notch an 85-75 win over Eastern Kentucky at The Pavilion. The win moved the Rebels’ program above .500 overall for the first time since 1959.

“Pretty amazing when you think about it,” Kennedy said.

The game was part of the MGM Grand Main Event. Ole Miss will host Georgia State on Friday at 6 p.m. before heading to Las Vegas next Monday to take on Utah in the bracket portion of the tournament.

Deandre Burnett came off the bench for the second straight game to score a team-high 17 points for the Rebels, who led 40-34 at the half before building a lead that stretched to as many as 19 in the final 20 minutes. Burnett finished 4 of 8 from the floor with all of his baskets coming from 3-point range, continuing his hot start to the season — he has 34 points on 17 shots through the first two games — as he tries to move on from an inefficient junior season in which he shot just 35 percent from the floor.

“That’s the plan for me to be more efficient, and that’s the biggest takeaway from last year was me being more efficient and us winning more games,” Burnett said. “I think we’re 2-0 and I’ve been more efficient this year, so it’s a good start.”

Terence Davis also came off the bench to add 16 points and six rebounds in 23 minutes. Freshman Devontae Shuler scored 12 points in his first career start while Markel Crawford chipped in 10 points for the Rebels (2-0), who shot 48 percent from the field and made 10 of their 22 3-pointers.

Ole Miss finished with 19 assists while 10 rebounds from Marcanvis Hymon, who added eight points and three blocks, helped the Rebels finish plus-3 on the glass.

Eastern Kentucky (1-1) shot 51 percent to hang around early with the Colonels controlling the tempo by running most of their half-court sets through center Nick Mayo, who scored a game-high 19 points on 7 of 9 shooting and found open teammates when the Rebels’ defense broke down. Dedric Boyd matched Mayo’s 19 points while Jackson Davis also finished in double figures with 11 points.

“We’re just not making the right decision enough,” Kennedy said of the Rebels’ defensive rotations, “and that’s something we’ve got to get better at.”

But the Rebels eventually used their defense to speed up the Colonels, scoring 18 points off 12 turnovers. Seven straight points from Shuler gave Ole Miss a 59-45 lead with 12:11 left, and Eastern Kentucky got within single digits just once the rest of the way as the Rebels reached the 45-point mark in the second half for the second straight game to pull away for the milestone win.

“Some of that is we’re still trying to figure out who can play with whom,” Kennedy said. “We’re mixing and matching, and hopefully we can formulate a formation in our rotation.”

Watch Kennedy talk about the Rebels’ win in the following video.