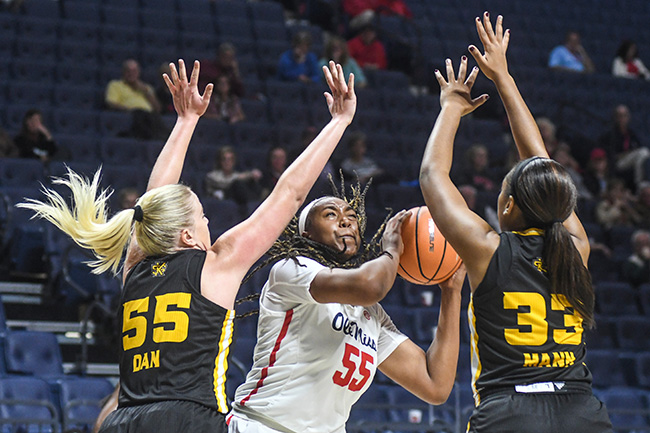 Matt Insell expected challenges in the non-conference portion of the schedule. He just was not expecting one to come in the second game of the season.

At least the first 20 minutes of it.

Ole Miss overcame a sloppy first half to defeat Kennesaw State 92-63 at the Pavilion at Ole Miss on Monday night.

After outscoring the Owls by only four points in the first half, the Rebels (2-0) outscored them 54-29 as head coach Matt Insell picked up his 60th career win at Ole Miss.

“It was a bad start for us in the first quarter. That’s something we’ll have to fix in what we’re doing defensively there,” Insell said. “I thought we settled in from that point forward and play pretty well. Offensively, we continue to click. Scoring 92 points, I don’t care who you’re playing that’s pretty good.”

The second quarter, and beyond, went much better with the Rebels using a 19-12 period to take the lead for good. Ole Miss outscored Kennesaw State 54-29 in the second half.

One issue for Ole Miss two games into the season are turnovers. The Rebels committed 14 in their season opener vs Northwestern State on Friday and turned the ball over 17 times against the Owls (0-2).

“We’re playing without our point guard,” Insell said. “We’re playing with a new point guard in Barbara Johnson. She had five turnovers. I think a lot of that will be limited down some. She’ll still be playing the minutes she’s playing, but when you have somebody else that she can feel around with. She can watch, she can see. That’s going to be important whenever we get Alissa (Alston) going again.

Johnson — who earned her second career start in as many games with the Rebels — has been filling in for Alston, who is still recovering from an injury.

The post play for Ole Miss is beginning to improve as Insell has both of his players back at his disposal. Taylor has scored 13 and 19 points in the first two games, respectively and junior Shelby Gibson added 10 points on Monday.

Gibson is returning from a knee injury that sidelined her most of October while Taylor is also getting back into game shape after suffering an injury of her own last month, sidelining her for three weeks.

Ole Miss hits the road for the first time this season when they travel to Chicago to play in the Maggie Dixon Classic this weekend.

“We got our hands full on Friday night,” Insell said. “If we get past (Saint Louis), obviously we get DePaul which is a very good team.”