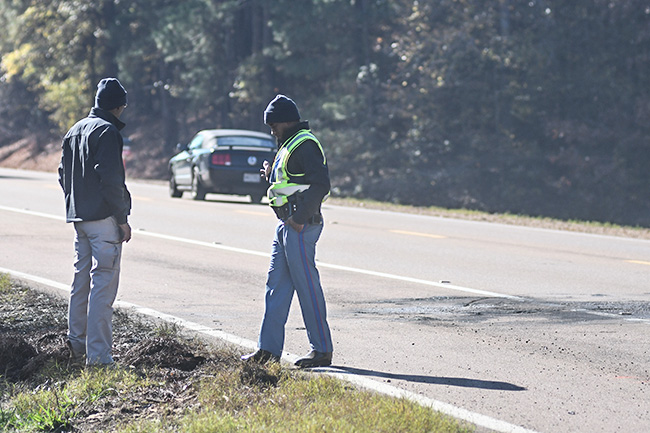 Highway patrolmen, in Oxford, Miss. on Monday, November 13, 2017, look over the site of wreck on Highway 7 south that killed two persons on Saturday, November 11, 2017.

The Mississippi Highway Patrol is reporting that two wrecks claimed three lives over the weekend in Lafayette County.

On Friday around 5:15 p.m., Oxford resident Chris White was killed when his pickup was struck on the driver’s side by a westbound log truck while crossing the intersection of Highway 6 and University Avenue. Stacy Johnson of Water Valley drove the log truck.

A passenger in White’s vehicle and the truck driver were transported to Baptist Memorial Hospital-North Mississippi with injuries.

The cause of this crash is still under investigation.

White worked as a self-employed framer and worked in construction for most of his life. He was an avid fisherman and family members said he loved to build things and enjoyed working with his hands.

The second accident occurred on Saturday around 10:30 a.m. and claimed the lives of two Memphis residents.

The F-150 and the Chevy caught on fire. Charlton and his passenger, Cothern Wilkes, both of Memphis, were pronounced dead at the scene.

Gordon was flown to the Regional Medical Center in Memphis and Ray was transferred with nonlife-threatening injuries to Baptist.

The cause of the wreck is still under investigation.