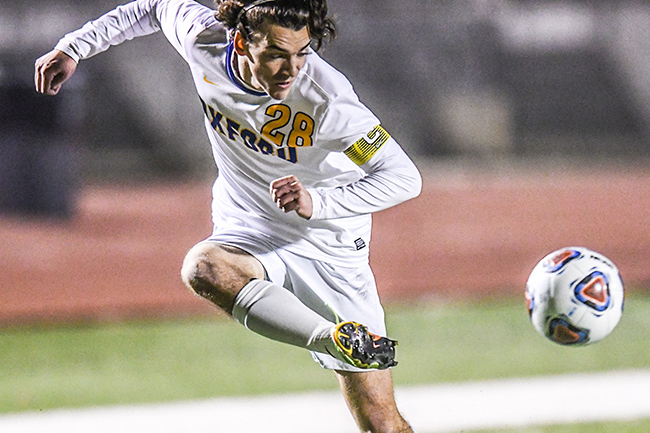 Oxford High’s Keaton Calhoon passes the ball to a teammate against Starkville at Bobby Holcomb Field in Oxford, Miss. on Tuesday, November 14, 2017. Calhoon scored three goals in the Chargers 5-1 win.

The move to 6A seems to suit Oxford just fine.

A 2-2 draw with Clinton to begin the season followed by Tuesday night’s 5-1 win over Starkville has the Chargers undefeated through their first two tests in their new environment.

“We’re excited to be in 6A,” Oxford head coach Charles Sabatier said. “We had fun in 5A but I think 6A is a good fit for Oxford soccer.”

Senior Keaton Calhoon tallied three goals to pace Oxford (4-0-2) in their victory over the Yellowjackets.

The first half was mostly a chess match with neither team able to capitalize on scoring chances until late.

Then the final ten minutes of the first half brought the action.

Via a penalty kick, Calhoon scored his first goal of the night in the 31st minute to give the Chargers the 1-0 advantage.

It did not stay a one-goal margin for long as Starkville (2-1) scored on a penalty kick of their own three minutes later.

A minute after that Josh Fulton put Oxford back on top with a goal in the 35th minute and the Chargers took a 2-1 lead into halftime.

“The Clinton Classic was about figuring some stuff out and tonight I think we sort of locked some things in place,” Sabatier said. “I think we just kept the pressure on and we played Oxford soccer. Which is smart, quick passes. Possesing the ball, make them chase, make them tired and be creative up top.”

Oxford did indeed keep the pressure on the Yellowjackets once the second half began.

Calhoon scored his second goal of the night 11 minutes in and followed with his third and final goal in the 67th minute.

Bennett Shull added a goal in the final minutes of the match for the winning margin.

“(Calhoon) is a phenomenal player,” Sabatier said. “He’s going to do great things this season.”

Oxford takes a long Thanksgiving break and returns to the pitch on Nov. 28 when they host Southaven at 7 p.m.