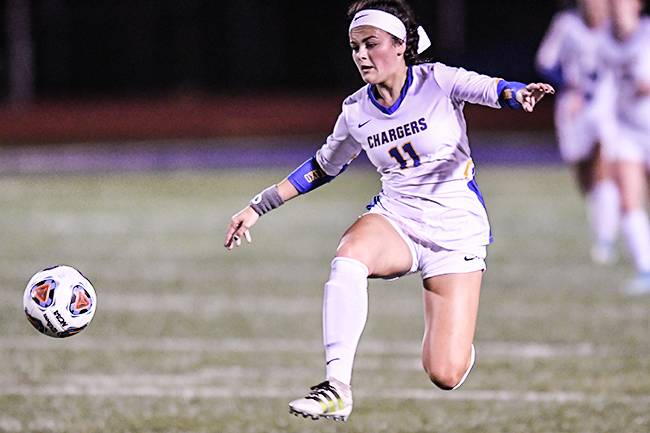 Oxford’s first taste of Class 6A soccer was not one they were fond of. Two losses to Clinton ended a season-plus long winning streak.

The Chargers were undermanned. Not an excuse, just fact.

Morgan O’Connor was away in a showcase in Atlanta and Hunter Crane’s starting lineup resembled a M.A.S.H. unit.

Tuesday was a much different story.

Oxford defeated Starkville 5-2 at Bobby Holcomb Field in what could be a preview of things to come in February. Crane felt it could have been an even more lopsided victory

“I felt like we were a little complacent today,” Crane said. “We didn’t come out and play our best soccer. We’re talented enough to still walk away with a 5-2 win against Starkville. …I was trying to hammer home (after the game) that if we just show up like we did tonight there’s a possibility that we get beat. We talk about being the best in the state and taking it to 6A then we’re going to have to show up night in and night out.”

The seal was broken when senior captain Ally Shinall connected from long range with a goal nearly 40 yards out in the 25th minute. As time expired in the first half Katelyn Rock scored to give the Chargers a 2-0 advantage at halftime.

In her first game of the season, O’Connor netted her first two goals of the year with both coming in the second half. The sophomore scored in the 60th and 79th minute. Eighth grader Grace Freeman, who played and scored goals during last weekend’s Charger Invitational, scored in the 75th minute to give Oxford a 4-1 lead after Starkville’s Meg Rogers put the Yellowjackets (2-1) on the board in the 68th minute.

“We were more full strength tonight than we have been,” Crane said. “(Grace) is very energetic and enthusiastic. We need a little shot of energy and she brings that to us. She’s very dynamic in the midfield, very comfortable as an eighth-grader. Very high ceiling. “

Starkville’s Anne Marie Ross scored their second goal of the night in the final two minutes of the match.

Oxford has a long layoff upcoming with Thanksgiving break. The Chargers will not play again until Nov. 28 when they host Southaven at 5 p.m.