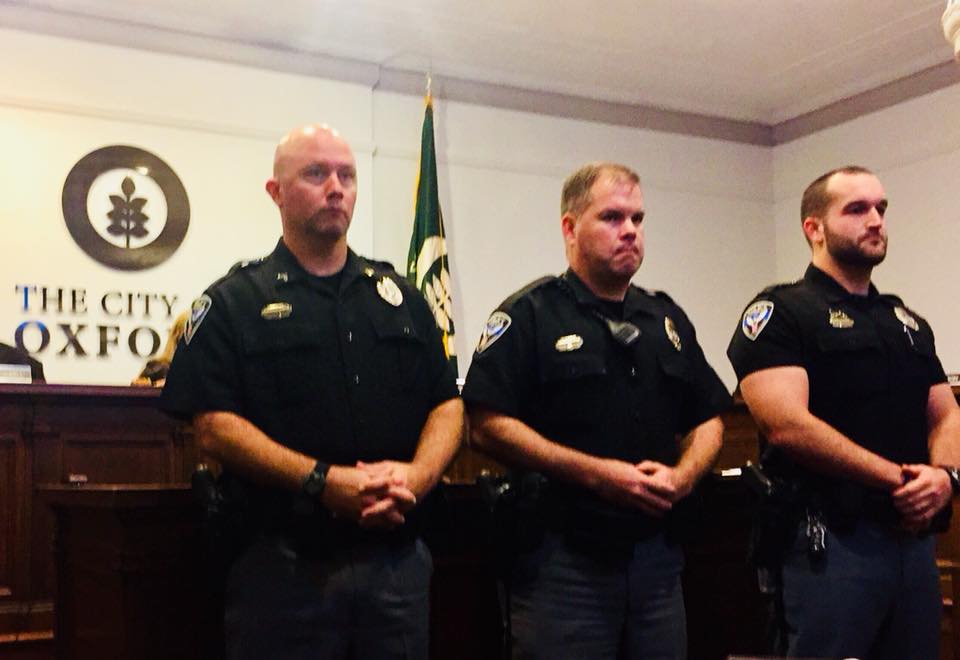 Corporal Jason Brown, Officer Mark Whitaker and Officer Scott Hollowell with the Oxford Police Department were recognized earlier this month by the Oxford Board of Aldermen for their life-saving efforts in treating a suspected drug overdose patient with Narcan.

On Oct. 10, law enforcement officers around the state were sent doses of Narcan, a drug that counters the effects of an opioid overdose. A little more than two weeks later, three police officer with the Oxford Police Department got to see how the drug works first hand.

Officer Scott Hollowell heard a call come in over 911 about a man who was unresponsive. Knowing Corporal Jason Brown and Officer Mark Whitaker were nearby, he sent them to the call on Old Taylor Road before heading to the address himself.

“I arrived and the guy’s roommates let us in and we found him on the patio – he was blue,” Brown said. “He wasn’t breathing and he had only a faint pulse. He was near death.”

The man showed symptoms of an overdose and Brown immediately administered a dose of Narcan into the man’s nose. There was little improvement in his condition. Arriving on scene, Hollowell administered another dose.

“He started showing more signs of life,” Brown said. “He was breathing better and his pulse got stronger.”

By the time EMS arrived, the man was conscious and speaking to paramedics.

Gov. Phil Bryant announced this summer that every sworn officer would be issued and trained on how to use naloxone, which is sold under the brand name Narcan.

The effort was funded by the State Targeted Response to the Opioid Crisis Grant, as part of the 21st Century Cures Act.

Earlier this year, lawmakers passed a bill that allows anyone in the state to purchase Narcan without a prescription.

“Our first responsibility is to stop those that are losing their lives. These are not people in back alleys, these are our neighbors and friends and family members,” Bryant said in July. “This has been proven to save the lives of those that are dying in the very moment they could lose their lives. We must also realize that treatment of this epidemic is our first responsibility and this is part of that treatment.”

Narcan blocks the opioid from the opiate receptors in the brain and reverses the effects of an overdose.

Officers are instructed to administer the Narcan in any suspected drug overdose as the success chances are increased the faster it can get into the patient’s system.

“If they didn’t ingest opioids, it’s harmless and won’t do anything,” Whitaker said.

The incident was the first time for OPD officers to administer Narcan during a call; however, Hollowell, Brown and Whitaker are certain it won’t be the last time as they are seeing an increase of opioid-related overdoses in Oxford.

“The main thing is that people should not waste time in calling 911 if they suspect someone has overdosed,” Brown said.

“People are afraid to call because they’re worried about being arrested and spend time hiding evidence,” Hollowell added.

“If (the roommates) waited any longer to call 911, their friend probably would have died,” Whitaker said.

Hollowell, Brown and Whitaker were recognized for their live-saving efforts before the Oxford Board of Aldermen on Nov. 7.

Oxford, Lafayette County and University of Mississippi to go…