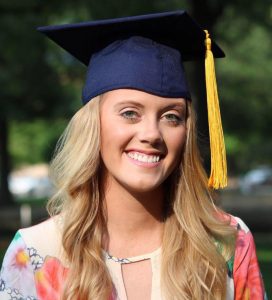 Even at a young age, Sydney had compassion for others and befriended kids who were not easily accepted by others. She accepted Christ at a young age and was a member of the One Way Youth Group at Northwood Church, Gulfport.

Sydney did not see herself as beautiful, though she was, and preferred to be in the background, staying busy whether it was on a swim team or leading a sorority function. She did not like to be the center of attention, but her lively personality drew others to her.  She loved to serve people and make others feel special.  Her sports interests were swimming and any sport her brothers were playing.  Sydney graduated with high honors from West Harrison High School in 2013.

After high school, she attended Ole Miss where she joined the Alpha Delta Pi Sorority, Delta Sigma Chapter. She received her Bachelor of Science Degree in Hospitality Management from Ole Miss in May 2017.  After graduating from Ole Miss, Sydney moved to Dallas, Texas, where she began working at the Four Seasons Resort and Club Dallas at Las Colinas.  Her new job gave her a chance to do that on a professional level.  She was a shooting star in her work.  Sydney loved the excitement of professional basketball and was becoming a Mavericks fan. She was an incredible support to her brothers and a mother to countless sorority sisters.

She was preceded in death by her grandfathers, Eddie John Pucheu and Henry R. Lero; and a close uncle, Jean-Pierre Pucheu.

An online guestbook may be signed and memories shared at www.riemannfamily.com.