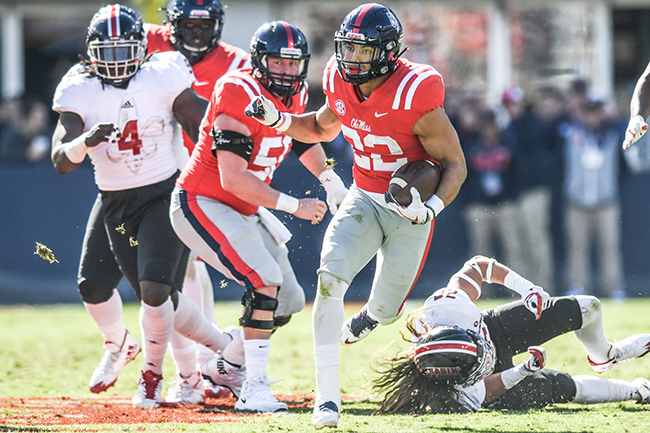 Jordan Wilkins isn’t healthy. He won’t be until the season is over.

It’s been hard to tell.

Wilkins has ignited a resurgent running game for Ole Miss despite dealing with a sprained ankle for most of the season. There’s been no thought of sitting out to let the joint fully heal with the senior down to just two games left in his college career starting with Saturday’s tilt against Texas A&M (6 p.m., ESPN2).

“I try not to think about it too much out there,” Wilkins said. “I just try to play. Whenever I tweak it or whatever, I might run off the field, let it chill out for a minute and come right back in.”

Tweaking it could mean a defender falling on it or having too much stress put on the ankle when Wilkins cuts or changes direction. Yet he’s fought through the pain week after week to help give more balance to the Rebels’ top-ranked passing offense in the SEC.

Ole Miss is still 12th in the league in rushing at 129.7 yards per game — the same spot the Rebels finished last season — but it’s an improvement from when the Rebels were dead last in the FBS after their first four games and averaging less than 100 yards per game as recently as five weeks ago.

The Rebels have averaged more than 183 yards on the ground over the last five games, including a 223-yard performance against Louisiana-Lafayette last week. Wilkins ran for 124 of those on just 14 carries with three of his four 100-yard games coming during that span to put him at 754 yards on the season — nearly double the amount he’s run for in any other season. His 6.6 yards per carry in SEC play are tied for most in the league.

It’s not inconceivable that Wilkins could become Ole Miss’ first 1,000-yard rusher since 2009 when Dexter McCluster racked up 1,169 yards. The last two teams on Ole Miss’ schedule, Texas A&M and Mississippi State, are eighth and fifth in the league in run defense, respectively.

“I think it took a couple games to figure out who we are,” Wilkins said. “I think we’re a downhill, trying to be more physical type running team, and I think that’s suited us well.”

It’s helped take some pressure off quarterback Jordan Ta’amu in his first three starts in the place of the injured Shea Patterson. Ta’amu has completed 74 percent of his passes for 1,268 yards and seven touchdowns with just two interceptions.

Wilkins didn’t want to take all the credit for the improvement on the ground. Ta’amu (149 rush yards, 4 TDs) has given defenses another element to account for in the running game while Wilkins credited the offensive line with getting more push as the season’s progressed.

But sticking with the ground game when it would’ve been easy to try to always rely on the Rebels’ prolific passing attack, interim coach Matt Luke said, has paid off with Wilkins leading the way.

Wilkins hopes he has one more good performance in him in front of the home fans Saturday, which will double as Ole Miss’ Senior Night. His ankle won’t be the only thing he’ll be trying to block from his mind.

“Not going to try to think about how this is the last (home game) too much,” he said. “Just go out, play my game and don’t overthink it.