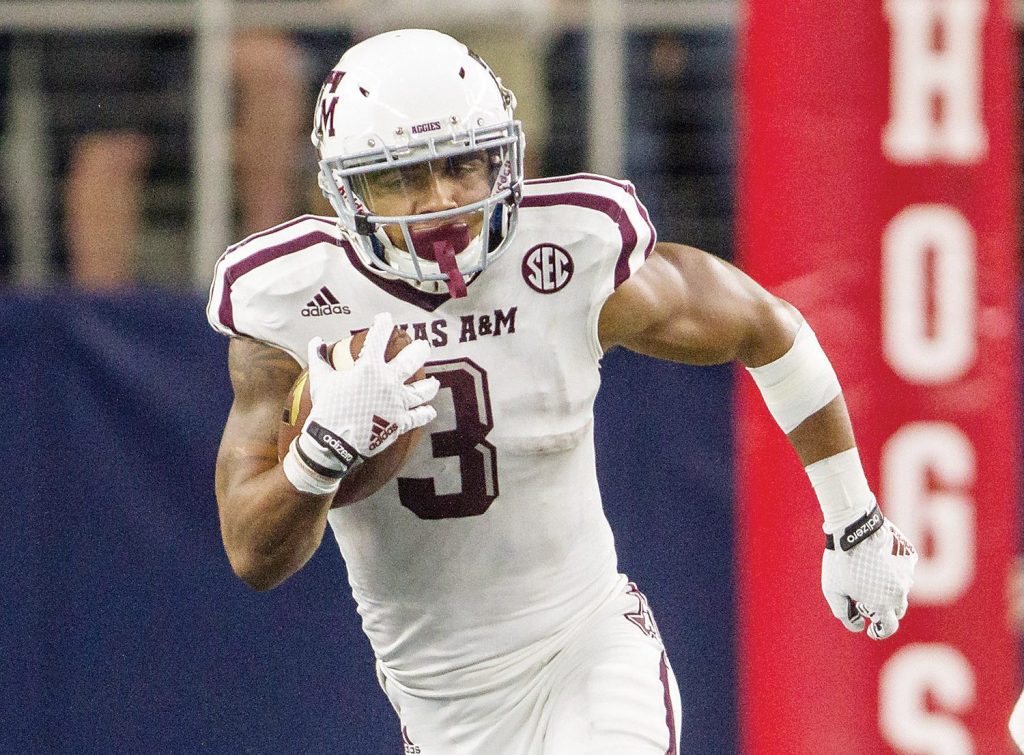 Texas A&M receiver Christian Kirk is a threat from anywhere on the field having already set a school record with six career punt returns for touchdowns. (Texas A&M Athletics)

But none of them are widely considered the most explosive player in the Southeastern Conference. That designation belongs to Christian Kirk.

Ole Miss is the next team having to game plan against Kirk as the Rebels prepare to host A&M on Saturday at Vaught-Hemingway Stadium (6 p.m., ESPN2). A&M’s do-it-all receiver has rewritten the Aggies’ record books in just three seasons and will look to add to his numbers this weekend from various spots on the field.

“He’s one of the best players in our league and has been for a long time,” Ole Miss interim coach Matt Luke said.

Kirk is second in the SEC in all-purpose yards at more than 115 per game. He ranks in the top 10 in the league in receptions (4.6) and receiving yards per game (57.5) even amid change at quarterback. A broken ankle suffered by Starkel in the Aggies’ season opener against UCLA forced Mond, a true freshman, immediately into action. But A&M was last in the SEC in passing efficiency before Starkel regained his starting job last week against New Mexico.

Starkel has thrown for 795 yards in four games with seven touchdown passes against one interception. Kirk has caught 46 passes for 575 yards and six scores, lining up out wide, in the slot and sometimes even in the backfield in an effort to find advantageous matchups for the Aggies to exploit.

“(Starkel) is going to feature Christian Kirk,” McGriff said. “This guy spreads the ball around, but you can clearly see No. 3 is the guy he wants to get the ball to.”

Kirk is just as much of a threat in the return game. He’s only returned seven punts this season with teams often electing to kick away from him, but one of those went for a 90-yard score last week against New Mexico — his school-record sixth punt return for a touchdown. He’s averaging more than 25 yards on kickoff returns and has a 100-yard return for a score.

He’s the first A&M player to return a punt and kickoff for touchdowns in the same season since 1973.

“He’s dynamic when he gets the ball in his hands,” Luke said. “They do a great job utilizing him out of the backfield and as a receiver and kick returner. You’ve got to know where he’s at all the time and you have to be able to mark him.”

It’s the next challenge for an Ole Miss defense that’s 125th nationally against the run and allowing 12.6 yards per completion. The Rebels will need to force A&M into obvious passing situations, but even that won’t guarantee getting off the field with Kirk lurking for the SEC’s fifth-ranked passing offense.

“We’ll have our work cut out,” Luke said.