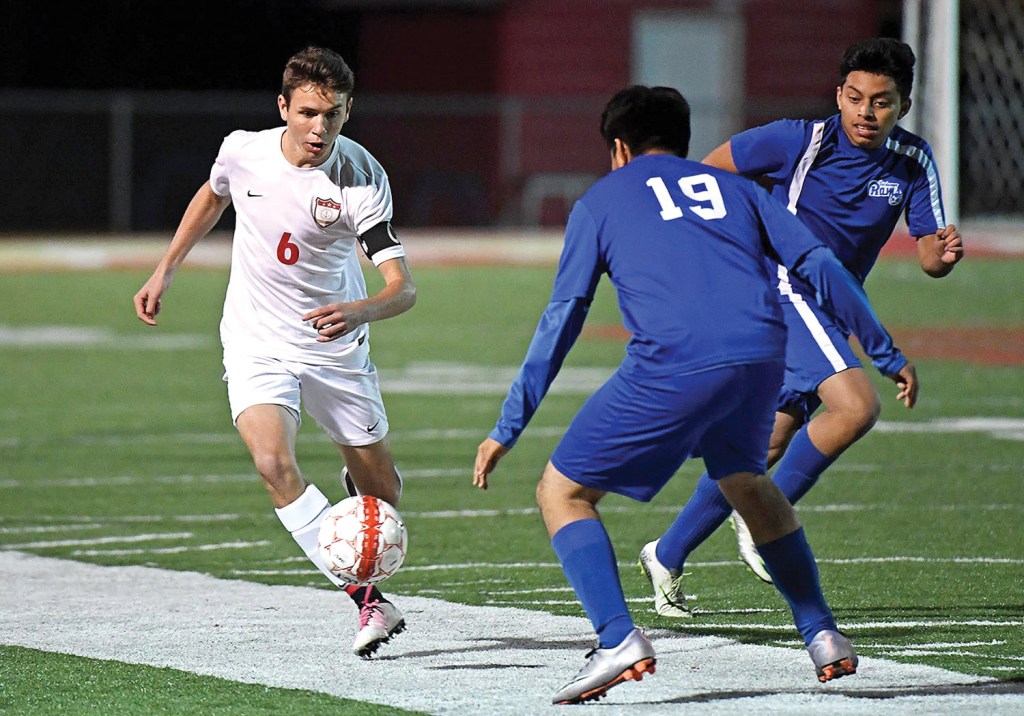 Lafayette’s Alex Fikes (6) looks for room past a Vardaman defender in a soccer match at Lafayette’s William L. Buford Stadium in Oxford on Thursday. The Commodores won 5-1. (Thomas Graning)

In the early stages of the season, the Lafayette High soccer teams are not having much trouble finding the back of the net.

Before enjoying the turkey and dressing during next week’s Thanksgiving break, the Commodores had one last obstacle to clear.

Once it was all said and done on Thursday night, it turned out to not be much of an obstacle at all.

The Commodores swept their pair of games against Vardaman with the girls winning 8-0 and the boys coming away with a 5-1 victory at William L. Buford Stadium.

In the girls’ contest, the match was over before it began.

Two minutes in, Julia Perkins scored, putting Lafayette (5-1) up early. The scoring would not stop there.

Goals by Lucy Wilson, Lindsay Hudson and Halle Moore put the Commodores up 5-0 in the first 12 minutes of the match.

“I think we’re starting to put some things together,” Lafayette head coach Melinda Scruggs said. “We just want to get everybody involved and we’ve been doing that so far this year. A lot of the attackers are being able to score with the different ways we’re putting the ball up top.”

Emma Scott and Emma Hayes Roberts added on the first 22 minutes of the half for the 7-0 halftime lead for Lafayette.

The Commodores tacked on one more in the second half for the winning margin.

This year’s roster may not be the most experienced, but Lafayette makes up for it in physicality.

The boys handled Vardaman with ease, cruising to their fourth win of the season.

Junior striker Alex Fikes paced the Commodores (4-2) with two goals while three others chipped in with a goal each.

“That was a fun game,” Lafayette head coach Gene Anderson said. “Not a lot of bad things happened. I was pleased with the way they played. … We’re inexperienced in some places, but we’re fairly big, physical. We’re playing with a lot of intensity.”

Fikes got the night started with a goal in the seventh minute to put Lafayette up 1-0. Eleven minutes later, Carlos Barahona doubled their lead with a goal and Lafayette held on to a 2-0 lead at halftime.

The lead increased by one quickly after intermission when Mohammed Alryashi scored four minutes into the second half. Fikes followed quickly after with his second goal of the night for the 4-0 lead.

Vardaman (0-2) got on the board late in the second half to avoid the shutout.

Jose Lopez added the final goal of the game for the winning margin.

The competition may not have been at a high level for Lafayette in their first few matches, but the schedule ramps up after Thanksgiving.

The Commodores travel to Olive Branch on Nov. 27 for their first of five road matches out of their next seven. Trips to Center Hill and Region 2-5A foes Grenada and West Point are included.