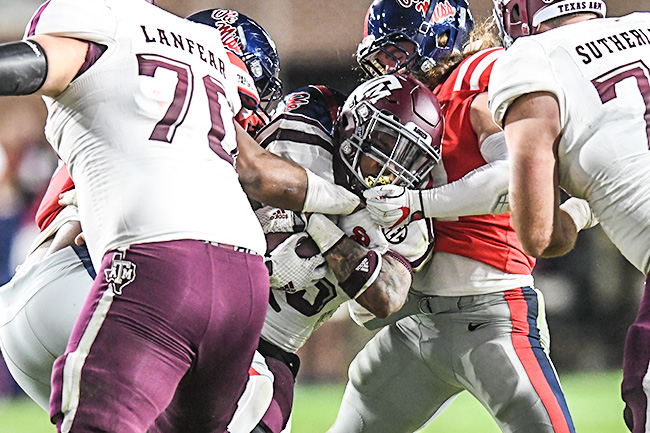 It’s usually been Ole Miss’ offense that’s given the defense plenty of opportunities to hold a lead this season. On Saturday, the Rebels’ defense gave the offense chance after chance to take it back.

Ole Miss couldn’t do it.

Texas A&M came away a 31-24 winner in the teams’ SEC Western Division tilt at Vaught-Hemingway Stadium, but only 24 of those came at the expense of the Rebels’ defense — nearly 12 fewer than what Ole Miss is giving up on average. After the Aggies reached the end zone on their first two possessions and rolled up 300 yards in the first half, Ole Miss clamped down.

An Ole Miss defense that’s been much maligned this season — the Rebels came into the game next to last in the SEC in scoring defense and run defense while ranking last in total defense — held Texas A&M to 119 yards on 44 carries, the fewest among Ole Miss’ opponents this season, and just 91 total yards in a second half that started with the Aggies missing a potential tying 45-yard field goal on their first possession of the third quarter.

“Everybody was just flying around the ball,” said linebacker Tayler Polk, who had a career-high 12 tackles. “Winning on first down is a big key whenever you play teams like this in our conference.”

Said defensive coordinator Wesley McGriff, “I think our young men made their mind up, went out and did our job. We filled our gaps, we tore off blocks and we did our job.”

Ole Miss forced a punt on A&M’s next possession before the Aggies’ defense produced A&M’s only touchdown of the second half when Derrick Tucker stepped in front of a late throw by Jordan Ta’amu over the middle and returned the interception 19 yards for a score, giving A&M a 28-24 lead with 8:04 left in the third quarter.

Ole Miss held the Aggies to just 30 yards over their next four possessions and forced five straight punts at one point, but the Rebels’ offense found the going equally as tough against the pressure of A&M’s front seven. The teams swapped punts for much of the second half with five consecutive possessions ending that way at one point for Ole Miss, which mustered just 66 yards and four first downs after halftime after racking up 325 yards in the first two quarters.

A&M, which began the night with an SEC-best 33 sacks, began to impose its will in the trenches in the second half, recording all three of its sacks in the final two quarters and pressuring Ta’amu at other times, including on his lone interception where he was forced to try to reset his feet while avoiding pressure. Ole Miss didn’t help itself with 13 penalties, many of them coming on holds and false starts up front that put the Rebels’ behind the chains and in obvious passing situations.

“Their defense just brought a lot of pressure,” Ta’amu said. “Penalties killed us a lot. We just shot ourselves in the foot. And I could’ve made better throws downfield and could’ve been smarter with the ball.”

Still, Ole Miss’ offense took the field one last time with a chance to drive 66 yards for a tying touchdown after a goal-line stand by the defense forced A&M to settle for Daniel LaCamera’s chip-shot field goal with 1:59 left. But the Ole Miss picked up just 8 yards on the first three plays of the possession before Ta’amu’s fourth-down pass intended for DaMarkus Lodge was batted away to ensure a scoreless second half for the Rebels.

It ended a frustrating night for an Ole Miss offense that couldn’t take advantage of one of the defense’s better showings of the season.

“The defense played a hell of a game,” Ta’amu said. “They gave us the ball, and we just had to score and drive down the field and we didn’t.”

Sophomore running back D’Vaughn Pennamon was carted off the field after taking a hit late in the third quarter. The diagnosis was a dislocated knee, interim coach Matt Luke said.

It was just the third carry for Pennamon, who was upended and stayed on the ground for several minutes while being tended to by trainers. The sophomore eventually had an air cast placed on his knee before being carted off the field.

There could be more damage, but Luke said he didn’t know the full extent of the injury immediately after the game.

Offensive lineman Alex Givens was taken to the locker room in the second half with a concussion, Luke said. Givens was cleared this week after going through concussion protocol and missing the previous game against Louisiana-Lafayette.