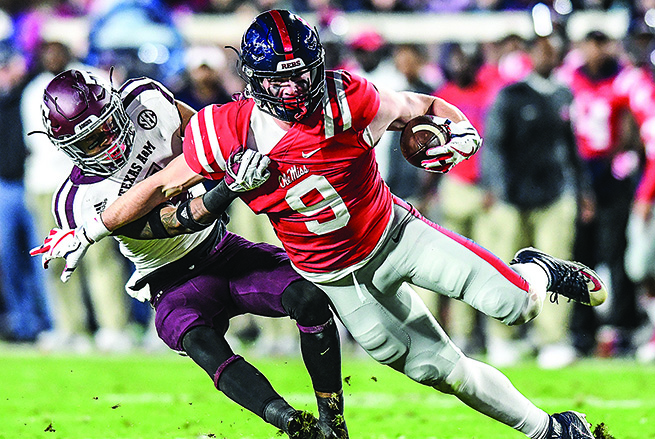 Ole Miss tight end Dawson Knox (9) is tackled by Texas A&M Aggies defensive back Derrick Tucker (4) and fumbles on the play for a turnover at Vaught-Hemingway Stadium in Oxford, Miss. on Saturday, November 18, 2017. (Bruce Newman, Oxford Eagle via AP)

Ole Miss scored 24 points in the first half. They did not score again.

The Rebels watched Texas A&M score 10 unanswered points in the final two quarters for a 31-24 win over Ole Miss inside Vaught-Hemingway Stadium on Saturday night.

It was senior night as the Rebels’ 20 seniors were honored in pregame ceremonies.

Ole Miss (5-6, 2-5 Southeastern Conference) was penalized 13 times for 102 yards with the two biggest coming on Texas A&M’s second to last drive. The Rebels were hit with facemask penalties that allowed the Aggies (7-4, 4-3) to kick a field goal to make it a seven-point lead.

On the Rebels final possession, A.J. Brown and DeMarkus Lodge dropped back-to-back passes to turn the ball over and give A&M the win.

Jordan Ta’amu had his worst performance as a starter. The junior quarterback went 19-of-34 for 189 yards and two touchdowns. Ta’amu threw one interception and it was a costly one as defensive back Derrick Tucker went 10 yards for a pick-six midway through the third quarter. The score gave the Aggies their first lead of the game.

The offense was shutout in the second half by the Aggie defense, which held them to six punts — five of them consecutively — an interception and the turnover on downs to end the game.

The Rebels had 325 total yards in the first half and only 66 in the second.

In his final game at home, running back Jordan Wilkins rushed for 147 yards and a touchdown on 19 carries. The touchdown came off a 63-yard run midway through the first quarter.

Brown finished the game with seven catches for 70 yards and a touchdown.

Senior linebacker Tayler Polk led the team with 12 tackles. DeMarquis Gates became the first person to get to 100 tackles in a season since Patrick Willis with his 11 tackles on Saturday.