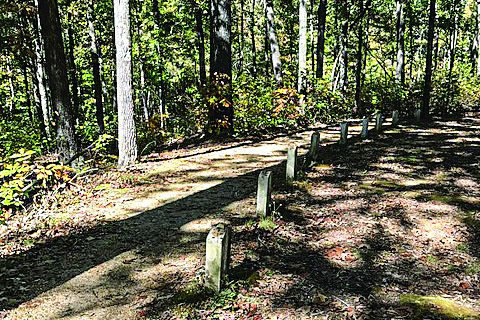 When fall colors begin to appear on the trees and the sun shines brightly on a crisp morning, do you ever have a restless feeling that only a road trip through the countryside will cure? Thinking a ride on a beautiful day is just what the doctor ordered, but where do you go for an afternoon get away?

We decided to explore part of the Natchez Trace and North Mississippi. Driving the Trace to Nashville many times, we had never taken the time to stop and explore the historical sites along the way. Getting on the Trace in Tupelo, our first stop was the Chickasaw Village site at milepost 261.8. We chose to forego the hiking trail and walk around the grounds of the early Chickasaw settlement where several houses and a fort once stood.

Park Headquarters stands at milepost 266, and it provides guests with maps, a wall of history, a small gift shop, restrooms, and friendly suggestions from the ranger on duty. The ranger suggested that we stop first at a portion of the Old Trace, located just three miles up the road at mile marker 269. A short 5-minute hike took me to the gravesites of 13 unknown Confederate soldiers. The markers face backwards toward the Trace, making it easy for travelers to read and remember. Small stones and coins had been placed on all 13 markers. The fall colors magnified the awesome feeling of being in a sacred place with the sun filtering through the gold and red leaves.

Our next stop was Dogwood Valley at mile marker 275. We must return in the spring when the trees are in full bloom. The area is so named because of the many old dogwoods standing along a sunken part of the Old Trace. We did not take the 15-minute walk through the trees but continued north for 10 or 11 miles to Pharr Mounds. The marker says that the eight burial grounds here were built between 100 and 200 A.D. by a tribe of nomadic Indian hunters and gatherers who returned here to bury the dead with their possessions. The mounds are scattered over an area the size of 100 football fields and at least four mounds are visible from this stop. There is also a restroom and water fountain here.

A few more miles to milepost 293, and we were crossing the Tennessee-Tombigbee Waterway, which runs 234 miles from the Tennessee River to the Gulf of Mexico. We had been on the Trace less than 40 miles, but with so many stops and no picnic lunch, we decided to take the access road to Tishomingo State Park and return to Oxford via back roads through the North Mississippi National Heritage Area. This state park was named for Chief Tishomingo, leader of the native Chickasaw tribe that once lived here. The winding roads in the park were lined with more beautiful fall colors.

Before heading home, we realized we were only 15 miles from Woodall Mountain. The highest point in Mississippi at 806 feet. A real back road, this one being gravel, took us to the top. Historians suggest that both Confederate and Union armies used this spot as an important lookout and that the battles of Iuka and at nearby Corinth may have turned the tide of the war against the Confederacy. Not finding a restaurant in the tiny town of Tishomingo and the only service station out of fried chicken, we knew it was time to head home and leave the back roads to the deer and other forest creatures. We had left at noon and had a 6-hour adventure so close to home, but so far away in time and place.