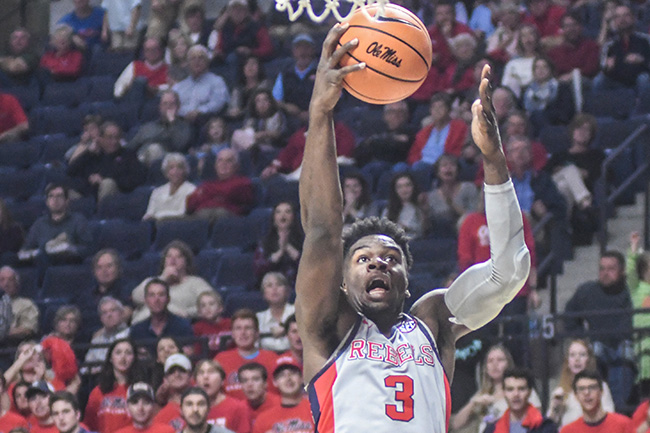 After playing its first three games in the friendly confines of The Pavilion, the Rebels will finish the MGM Grand Main Event in Las Vegas starting Monday with an 11:30 p.m. CT tip against Utah at T-Mobile Arena. The winner will get either UNLV or Rice in the championship game Wednesday.

The Rebels are worried about more than having a good time.

“We’re treating Vegas as a business trip,” guard Terence Davis said. “Going in there really to become relevant this week. That’s how we’re taking it.”

Ole Miss (3-0) has won its first three games by an average of 11 points with its closest coming its last time out in a five-point victory over Georgia State. Wins over Louisiana-Lafayette and Eastern Kentucky could possibly hold some teeth depending on how those teams perform over the course of the season, but getting Utah (3-0) on a neutral court presents the Rebels with a prime opportunity to start building a postseason resume.

The Utes, who are No. 49 in KenPom, were a National Invitation Tournament participant a season ago. Utah’s first two wins came against SWAC teams (Prairie View A&M and Mississippi Valley State), but the Utes handled Missouri, 77-59, their last time out.

“Utah and then (UNLV) or Rice in Vegas are going to be a whole new ballgame, so we’ve got to be ready,” Ole Miss coach Andy Kennedy said.

Ole Miss will counter with its depth in the backcourt, which has produced four double-figure scorers led by Davis (20.3 points per game). Marcanvis Hymon is leading the Rebels in rebounding at nine per game while fellow forward Bruce Stevens, who logged substantial minutes at center against Georgia State, is contributing 7.3 points and 6.3 rebounds per game.

The Rebels have been better in the final 20 minutes than the first through their first three games, averaging nearly 47 points in the second half. It’s helped Ole Miss overcome double-digit deficits in the first half twice.

Kennedy knows his team will need to be locked in sooner against the better competition it’ll be facing.

“There’s a lot of distractions in Las Vegas I’ve been told,” Kennedy said. “One of the things we’ve really got to do is work on our focus, and this is a great opportunity to do that.”

Monday’s game can be seen on AT&T SportsNet. Ole Miss will play two games in Vegas regardless of the outcome. A consolation game will be played before the championship game Wednesday.