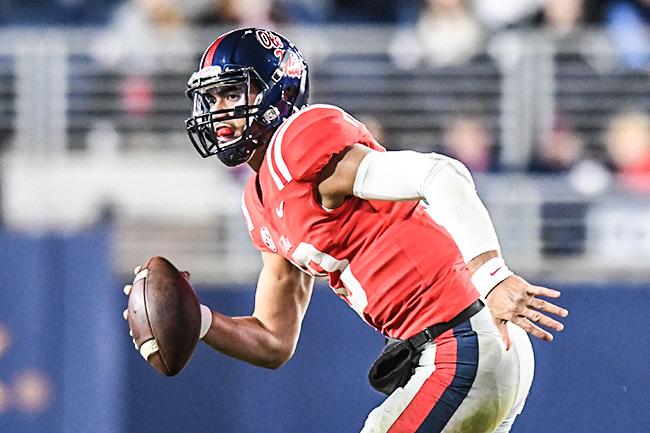 Names continue to get added to Ole Miss’ laundry list of injuries, but one of them isn’t Jordan Ta’amu.

The Rebels’ quarterback took a hit near his throat in the first half against Texas A&M but is “fine” and will play in the Rebels’ season finale Thursday against Mississippi State (6:30 p.m., ESPN), Ole Miss interim coach Matt Luke said. Ta’amu never came out of last week’s game but went just 7 of 15 passing for 51 yards with an interception in the second half of Ole Miss’ 31-24 loss.

Ta’amu said after the game he felt some dizziness and tried to drink as much water as possible once he got back to the sideline to clear his throat. After practicing Sunday, Ta’amu said all he was dealing with was the normal bumps and bruises.

“Just got treatment, so I feel a lot better,” he said.

Ta’amu finished the game 19 of 34 for 189 yards and two scores, but his lone interception turned into a pick-six when A&M’s Derrick Tucker returned it 19 yards for a score that put the Aggies ahead for good midway through the third quarter. A&M was also able to limit Ta’amu’s impact on the ground, holding him to just 24 yards on 14 carries, as the Aggies turned up the pressure with all three of their sacks coming in the second half.

Ta’amu said getting rid of the ball quick is being re-emphasized this week in practice.

“That’s what I’m trying to do this week, using my receivers down the field and using their talents,” Ta’amu said. “I’ve just got to give them the ball so they can make moves down the field.”

A&M came into last week’s game leading the SEC in sacks, but Ta’amu said Mississippi State’s blend of size and speed in the front seven makes the Bulldogs’ defense different than anything he’s seen so far this season. His other three starts came against Arkansas, Kentucky and Louisiana-Lafayette.

“They’re big and physical,” Ta’amu said. “A lot of speed, so I’ve got to look out for that. The o-line’s got to do a good job this week and our receivers have got to get open.”

Running back D’Vaughn Pennamon dislocated his knee against Texas A&M and will have surgery sometime in the next few weeks, Luke said.

Guard Alex Givens suffered another concussion against A&M and will miss this week’s game while going through protocol. Cornerback Jalen Julius is going through concussion protocol while receiver Markel Pack (concussion) is probable for Thursday’s game.