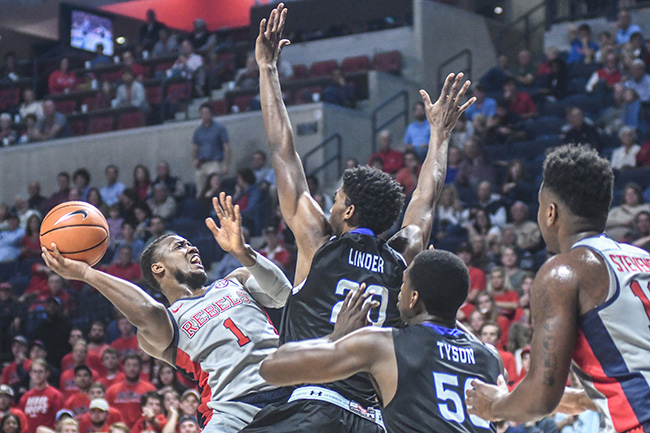 Deandre Burnett scored a season-high 21 points, but Utah’s balance was too much for Ole Miss to overcome as the Utes handed the Rebels their first loss of the season with an 83-74 win late Monday night in the MGM Grand Main Event in Las Vegas.

Justin Bibbins led Utah with a game-high 23 points while David Collette and Donnie Tillman each scored 13 points. Sedrick Barefield added 12 points for the Utes, who shot nearly 54 percent (14 of 26) from the field in the second half and knocked down 11 3-pointers to neutralize Burnett’s hot hand.

Ole Miss (3-1) will play Rice in the tournament’s consolation game Wednesday at 9 p.m. CT on ESPNU. Utah (4-0) will meet UNLV in the championship game later Wednesday.

Burnett finished 7 of 11 from the field and 5 of 6 from 3-point range. The Rebels’ senior guard added two free throws to cut Utah’s lead to 76-73 with 2:23 left, but Bibbins answered with his fifth and final 3 to start a 7-1 run for the Utes to end the game.

The rest of Ole Miss’ team combined to go just 3 of 18 from beyond the arc. Terence Davis, who was averaging 20.3 points coming in, was held to a season-low 10 points on 3 of 9 shooting. Breein Tyree (10 points) was the only other Rebel to finish in double figures.