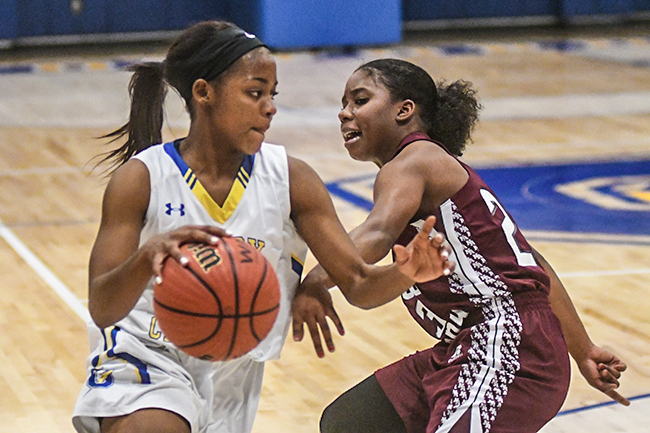 Oxford head coach Cliff Ormon came out of the locker room after his team’s game on Tuesday night with a smile on his face, offering a sentiment that rang true.

“A lot of people in that room needed that tonight,” Ormon said.

The Chargers used a dominant three-quarter stretch to rally and defeat New Albany 52-36 in the Lady Charger Challenge at the Oxford High gym.

It gave Oxford their first win of the season.

This was their second attempt against the Bulldogs (3-2) in just over two weeks after falling 60-57 in overtime at New Albany in their season opener on Nov. 2

“They needed (the win) because I think they’re a good team,” Ormon said. “We just haven’t been able to go into the locker room and the scoreboard say you’re a good team. It’s good to be able to say that tonight.”

After trailing New Albany 12-4 after the first eight minutes of play that included missed layup attempts and disjointed play, Oxford (1-3) found something and turned things around in the second quarter.

The Lady Chargers outscored the Bulldogs 48-24 to close out the game and it started with a 12-2 run to begin the second quarter.

“The biggest thing is we knew we couldn’t make a 10-point shot to come back and get the lead,” Ormon said. “We made some close shots that were close to the basket and kind of got us going. Then the kids just kind of kept fighting.”

After scoring two points in the first three quarters, senior Christina Owens warmed up in the fourth for 11 points and finished with a team-high 13 points. Fellow senior Calicia Zinn followed with 12 points.

Oxford finished with eight players in the scorer’s book.

The biggest impact of the game did not involve scoring, but the defensive effort from Caliya Toles.

The sophomore dominated under the basket with 16 rebounds — 15 of them defensive boards — as well as seven blocks. Most of them came in the second half.

“We rebounded the ball better in the second half,” Ormon said. “(Caliya) did that several times for us as a freshman and we knew she had it in her. …she impacted the game in a huge way and had zero points on the scoreboard.”

Before getting to enjoy some Thanksgiving turkey Oxford has one more game to play, closing out the Lady Charger Challenge tonight against Center Hill at 7 p.m.