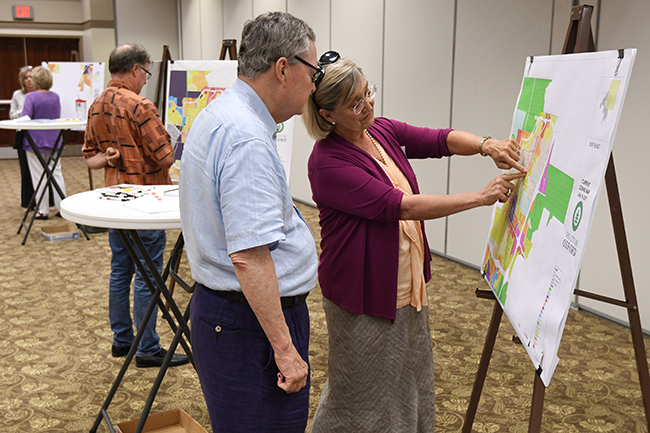 Oxford city planner Judy Daniel, right, looks over a proposed zoning map with Phil Bailey at the Oxford Conference Center in Oxford, Miss. on Thursday, July 27, 2017. The documents will also be available to view from 10 a.m. to 3 p.m. in the old RSVP room at City Hall on August 1-3.

Most items on the Oxford Board of Aldermen’s agenda get voted on and passed without much fanfare.

However, during the board’s regular meeting Tuesday, a round of applause echoed in the upstairs courtroom after the board voted unanimously to approve the new zoning ordinance and Land Development Code.

“This was a several-year process that involved hard work from our planning staff, engineering department, well, just about every department has had its hand in this,” said Mayor Robyn Tannehill. “Thank you to so many and the public for participating in this.”

The planning process began in 2014 and started with updating the city’s Comprehensive Plan, dubbed Vision 2037. The stated intent of Vision 2037 was to “provide a fresh planning basis from which to protect and preserve Oxford’s special sense of place and quality of life.” That plan was adopted last year, and since that time the staff has been working with Orion Consultants to update the Land Development Code and Zoning Map that reflect the policy directions in the Vision 2037 Comprehensive Plan.

Drafts of the new zoning code and map were made public several months ago during public meetings and online on the city’s website. Throughout the summer, the Oxford Planning Commission and Board of Aldermen reviewed public comments received and made changes and tweaks to both the code and the map along the way before Tuesday’s vote.

The new code replaces the current zoning laws, definitions and categories that allow for more mixed-use developments where people can live, work, shop and play without necessarily having to get in a vehicle.

All new developments submitted to the Planning Department will be reviewed under the new Land Development Code and map; however, developers who submitted applications before Nov. 17 and are already placed on the agenda for consideration by the Oxford Planning Commission during their December meeting, will be reviewed and considered under the current zoning laws.

Bob Barber, who heads up the Orion Planning Group, thanked the aldermen for their help during the three-year-long process to create Vision 2037 and the new Land Development Code and Zoning Map.

“We knew when we took the project it would be intense,” Barber said Tuesday. “Dramatic advances in Oxford needed to be made in its planning model and there is an immense amount of passion surrounding Oxford. It’s a significant place. You’re to be congratulated – your staff is superb and we look forward to great things happening in Oxford.”

The new code and map and other supporting documents can be viewed online at http://www.oxfordms.net/land-development-code-and-zoning-map.