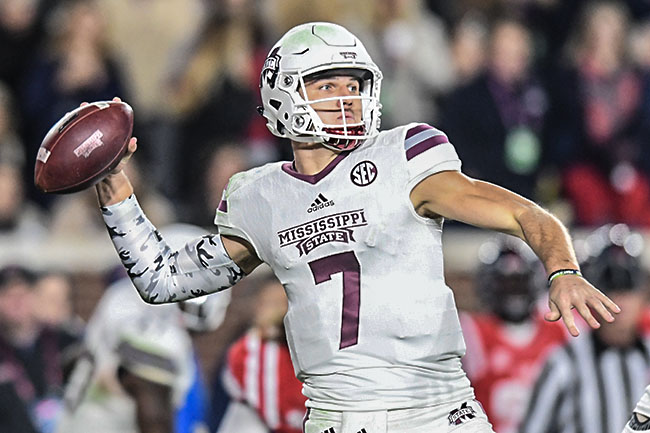 Nick Fitzgerald had a game to remember against Ole Miss last season.

Mississippi State’s quarterback accounted for 367 yards and five touchdowns with most of his damage coming on the ground. He ran for a school-record 258 yards and needed just 14 carries to do it, leading the Bulldogs to a 55-20 win over their bitter rival.

Fitzgerald is back this season, and the Rebels don’t expect No. 16 Mississippi State’s plan of attack to change much when the teams renew their rivalry on Thanksgiving at Davis Wade Stadium in Starkville (6:30 p.m., ESPN).

“He is their offense,” first-year defensive coordinator Wesley McGriff said.

Fitzgerald is on pace for his second straight 1,000-yard rushing season, leading the Southeastern Conference’s third-best rushing offense. His 968 yards and 14 rushing touchdowns are both tops for the Bulldogs (8-3, 4-3 SEC), who come in winners of five of their last six games.

Fitzgerald isn’t the Bulldogs’ only threat on the ground with running back Aeris Williams (944 yards) also closing in on the 1,000-yard mark for a Mississippi State offense churning out nearly 246 yards a game on the ground.

But Ole Miss (5-6, 2-5) figures to see a heavy dose of Fitzgerald until the Rebels prove they can stop him, something they never came close to last season. His touchdown runs covered 30 and 61 yards while he also had a 70-yard run, often running free in the second and third levels of Ole Miss’ defense.

Ole Miss is still 123rd nationally against the run but had one of its best showings of the season last week, limiting Texas A&M to 119 yards and 2.7 yards per carry. McGriff said after watching the tape that it was one of the defense’s better jobs of getting off blocks and filling gaps, something the Rebels will need to repeat if they want to give themselves a chance of slowing down the 6-foot-5, 230-pound Fitzgerald.

“I think that’s the big thing we have to do is we have to hit him,” defensive tackle Breeland Speaks said. “They’re going to try to give him the ball a lot and run the ball. Basically we’ve just got to hit him.”

The Rebels would prefer to do that the most on early downs in order to get Mississippi State in obvious passing situations and out of its element. Fitzgerald has thrown for just 1,770 yards and is one of three quarterbacks in the league with 10 interceptions.

It’ll be easier said than done against the SEC’s fifth-leading rusher. Fitzgerald has run for at least 100 yards in more than half of the Bulldogs’ games this season and is averaging 6.1 yards per carry.

“We’ve got to get him off schedule,” McGriff said. “If we let him stay on schedule, he’ll make it a tough ballgame for you.”