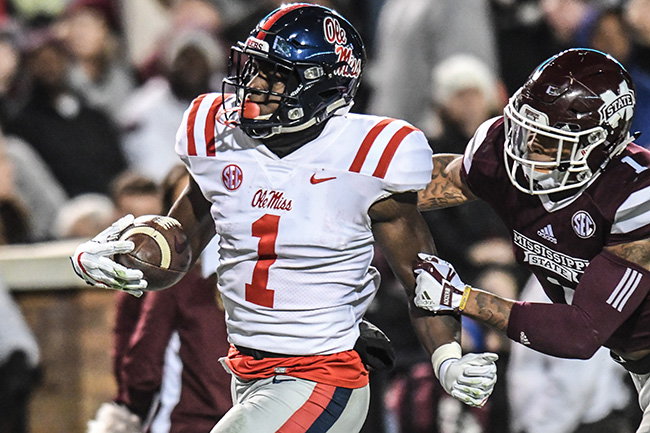 Brown returned to Starkville on Thursday for the Egg Bowl but not on the side many thought he’d take two years ago. It was the first time Ole Miss’ playmaking wideout had been back to play in his hometown since signing with the Rebels, and the sophomore proved to be just as much of a problem for Mississippi State as he’s been for the rest of the Southeastern Conference in Ole Miss’ 31-28 win at Davis Wade Stadium.

Brown caught six passes for 167 yards and a touchdown. The league’s leading receiver set a new single-season school record for receiving yards in the process, ending the year with 1,252 yards. He broke the previous record of 1,153 yards set by Laquon Treadwell in 2015.

“I knew eventually I’d have to come back here and play,” Brown said. “I just tried to give it my all.”

Brown, who was limited in practice this week after tweaking a hamstring against Texas A&M, started fast and continued to be targeted against a Mississippi State defense that came into the game allowing the fifth-fewest passing yards per game in the SEC (186.4). Five of his receptions came in the first half, including a 58-yarder on the Rebels’ second play to set up Ole Miss’ first touchdown.

He gave the Rebels some breathing room with a 77-yard catch-and-run score midway through the third quarter. Jordan Ta’amu’s pass looked initially like it was going to be overthrown, but Brown used every bit of his 6-foot-1, 225-pound frame to corral the ball by the fingertips before outrunning the Bulldogs’ defense to the end zone for his SEC-leading 11th touchdown to extend Ole Miss’ lead to 16-7.

“I just got a burst. I don’t know,” Brown said of the catch. “It just fell in my hands. I don’t know how I caught the ball.”

The score silenced many of the 59,345 fans who had their eyes squarely on the former four-star prospect that spurned Mississippi State to sign with the Rebels in a heated recruiting battle that ended in February 2016. Brown said he heard “a lot of things good and bad” from people back home in the days leading up to the game.

“I knew I had a lot of eyes on me,” Brown said. “I was just trying to keep my cool. No pushing and shoving after the play. Just keep my cool and play my game.”

Said interim coach Matt Luke, “He was going to be emotional coming back here. I told him, ‘Hey, let’s just go out and enjoy it.’”

Nothing surprised him about the volatile environment he walked into Thursday other than being spit on by a Mississippi State player he chose to keep anonymous.

It all made his performance back home that much sweeter.

Running back Jordan Wilkins ran for 110 yards on 14 carries, including a 46-yard touchdown midway through the fourth quarter. His sixth 100-yard game of the season put him at 1,111 yards for the season as he became Ole Miss’ first 1,000-yard rusher since Dexter McCluster in 2009.

Fitzgerald went down after taking a hit from Breeland Speaks and immediately grabbed his leg. He was tended to by trainers before being carted off the field with a cast. Fitzgerald watched the second half on crutches from the Bulldogs’ sideline.

Fitzgerald, who accounted for 367 yards and five touchdowns in last year’s Egg Bowl, came in fifth in the SEC in total offense and rushing. He completed one pass for 12 yards and ran three times for 16 yards before his injury.

Ole Miss knocks off No. 14 Mississippi State in…