Ole Miss knocks off No. 14 Mississippi State in 2017 Egg Bowl 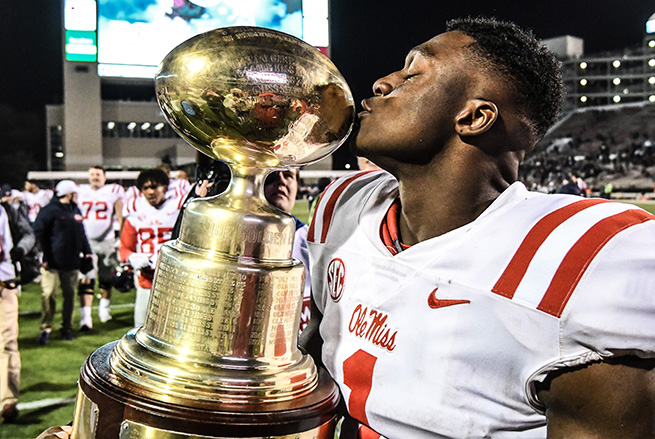 The Shea Patterson versus Nick Fitzgerald marquee matchup did not transpire.

Yet, the Egg Bowl still had drama.

After going up 18 points late in the fourth quarter, Ole Miss avoided blowing another lead and defeated No. 14 Mississippi State 31-28 inside Davis Wade Stadium on Thursday.

The rivalry game was back on Thanksgiving night for the first time since 2013. The Rebels also finish the season at 6-6 (3-5 Southeastern Conference), avoiding a second consecutive 5-7 year.

Returning to his hometown for the first time since signing with Ole Miss last year A.J. Brown had six catches for 167 yards and a touchdown. The sophomore receiver set a new single-season record with 1,252 total yards, passing Laquon Treadwell.

The touchdown came off a 77-yard throw from Ta’amu midway through the third quarter to put Ole Miss up 17-6 at the time.

Wilkins got the night started with a 22-yard touchdown run 39 seconds into the game. The senior capped his final year with 110 yards and two touchdowns on 14 carries. Wilkins finished with 1,036 yards this season, making him the first 1,000-yard rusher Ole Miss has had since Dexter McCluster hit the mark in 2009.

Gary Wunderlich also etched his name in the Ole Miss record book. He connected on his 64th field goal — a 33-yard attempt in the second quarter — passing Jonathan Nichols for most field goals made in a career. The Memphis native also became the all-time points leader with 345 points scored in his career.

D.K. Metcalf also scored a touchdown and had 67 yards on two catches.

The complexion of the game changed instantly when Mississippi State (8-4, 4-4) lost a key weapon. Fitzgerald dislocated his ankle in a gruesome injury in the first quarter, leaving the Bulldogs to turn to freshman Keytaon Thompson to come in.

Thompson held his on, throwing for 195 yards and one touchdown and rushing for 121 yards and a touchdown on 26 carries in his first taste of SEC football.

Mississippi State did not roll over, scoring 15 unanswered points in a span of four minutes late in the fourth quarter. The Rebels recovered an onside kick with just over a minute remaining to seal the win.