My dear sweet mother died on November 8, 2017. It was a Wednesday (church day). There was a full moon on the fourth. A slight rain was falling that day. She died early in the morning.

Mama was well-loved in Oxford. Even the pharmacy delivery man thought she was wonderful.

Her name was Drucilla  (Drue) Davis Legrand. She was widowed twice. Her husbands were Bob Davis and Ed Legrand. (both dynamic men) Bob and Ed were both pilots. She had five children. Judy Davis, Bobby Davis, Jeff Davis, Ed Legrand III and John Legrand were her children. She tried to be a mother the best she could from a distance (Texas) to her niece Carol. Mama’s sister died at a relatively early age of diabetes. (Carol’s mother Marie)

Mama was an accomplished businesswoman. She had a phenomenal memory. I have her memory. She had shiny, silky hair and was beautiful all her life. 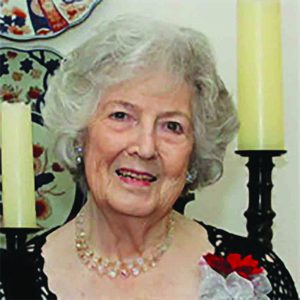 In David Magee’s 4th of July article, he told of a “well spoken” woman named Drucilla. I wish I could remember exactly how she told the funny story of Chris, her beloved silky terrier, and the squiggly oak things that covered his coat. She could make ordinary things into clever stories. I never knew until shortly before she died that she wanted to be a writer.

She was a member of Republican women and OU Methodist women’s circle. She belonged to Friends of the Museum. She was a patron of the arts. We went to the Ford Center and Shakespeare Festival together when she was still able. I would call her every time Ole Miss scored a touchdown and say “How about those Rebels”. This was our way of cheering for the Rebels together.

Mama played Bridge for many years. Her excellent memory helped her play a good Bridge hand.

My love of gardening stemmed from admiring her flowers as a child. I grow zinnias too. She also grew 4 o’clocks, roses including climbing and pink sweetheart roses.

Mama’s best friend for years was Mrs. Porter Fortune. Mrs. Fortune’s son, Cary, is friends with my brothers since childhood.

Mama was a great cook. She could make a box of generic brownies taste like homemade heaven. I use her recipes for potato salad, vegetable-beef soup, and barbeque beans. Yum! Daddy said the dog wouldn’t even eat her cooking when she first started cooking as a bride.

This is a celebration of Drue Davis Legrand’s life. She wouldn’t want for us to lose any sleep over parting until the afterlife. My brother says it’s difficult for him to not be able to call her too. I am starting volunteer work soon to fill the void of losing my mother. God bless Mama.