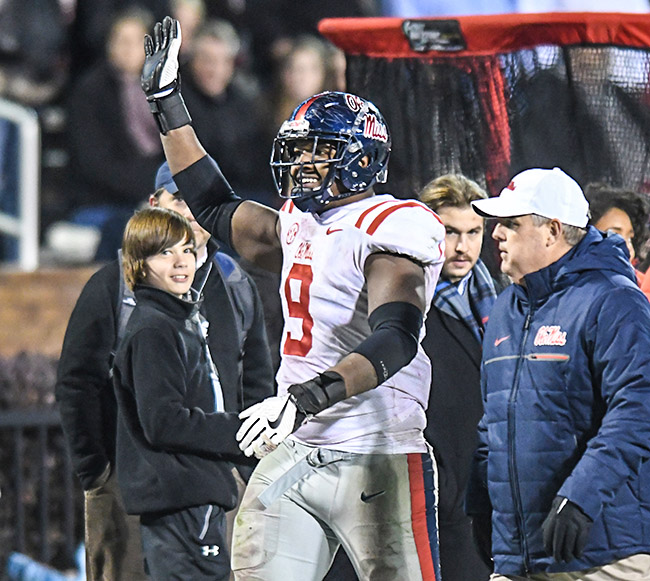 Ole Miss’ DK Metcalf and Breeland Speaks have apologized for incidents during the Egg Bowl that resulted in personal fouls and an ejection.

After scoring a 77-yard touchdown in the third quarter, Metcalf celebrated by lifting his leg to imitate a dog urinating, drawing an unsportsmanlike conduct penalty in the process. The redshirt freshman wideout, an Oxford native, also planted an Ole Miss flag at midfield once the final second ticked off the clock of the Rebels’ 31-28 upset win at Davis Wade Stadium on Thursday.

“I’m sorry for my actions in the Egg Bowl,” Metcalf said in a statement released through the school. “I let my emotions get the best of me in the game, and what I did is not a reflection of my coaches or the university.”

Speaks drew two personal fouls, the latter coming on an unsportsmanlike conduct penalty late in the fourth quarter after shoving Mississippi State’s Josiah Phillips in the facemask. The junior defensive end was ejected and waved at Mississippi State fans while being escorted to the locker room.

“Thursday night was certainly a chippy game, and in the fourth quarter, I let my emotions get the best of me,” Speaks said in a statement. “I regret those actions, and I look forward to learning from this experience.”

Said Ole Miss interim coach Matt Luke, “While I could not be prouder of the effort by our team in Thursday’s Egg Bowl victory, I was also disappointed in how some of our players let their emotions get the best of them. Those actions are not representative of who they are as men and not indicative of the type of behavior we instill in our student-athletes. This will serve as a teaching moment for these men, and we look forward to seeing them grow from this experience.”

Breeland Speaks waves to MSU fans as he walks to the locker room after being ejected for a personal foul pic.twitter.com/KmfShlrheb