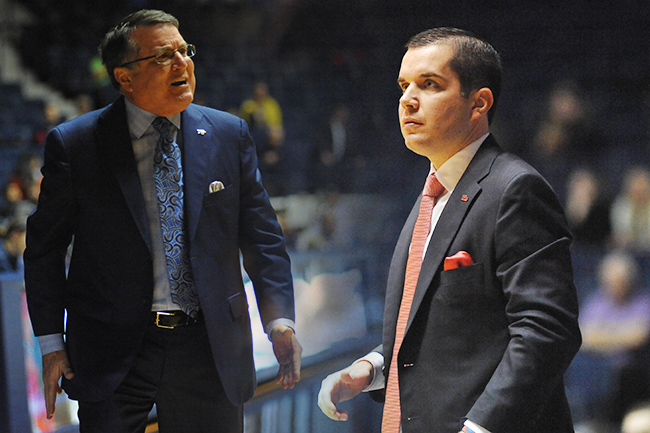 It was a game that was never supposed to be played ever again. As long as the Insells had their way.

Ole Miss hosts Middle Tennessee State on Wednesday (7 p.m., SECN), pitting father versus son one more time. Matt Insell — in his fifth season at Ole Miss — will take on his father, Rick, who is in his 13th season and holds a 3-0 advantage in the matchup.

On Nov. 23, 2014 the duo made history as the first father and son head coaches to play against each other in NCAA Division I. The second time the two played was a third round game in the WNIT with Middle Tennessee coming away with the home win, and Rick ending his son’s season.

The last time the Rebels and the Blue Raiders met was once again in Murfreesboro, Tennessee on Nov. 22, 2015 with Middle Tennessee State coming away with the 84-75 win.

A trilogy was all that was planned to take place between the two schools. But, a ‘break glass in case of emergency’ situation came up and the elder Insell came through for his son.

With potential quality opponents for the Rebels’ home schedule falling through, Matt turned to a familiar face and his dad was happy to add Ole Miss to their road slate.

“We didn’t particularly want to play the game,” Insell said. “We wanted to be done with it. But, we both want to be in the NCAA Tournament. They got a good RPI, we’re going to have a good RPI and so those type of things it becomes an RPI situation…. Playing Middle Tennessee helps that.”

The first release of RPI rankings for this season will come out next week. With a win over Troy and a road win over Temple, adding a win over Middle Tennessee State could look good on a resume come late February.

Going against his father’s team has become old hat for Insell, but he will be instilling a new approach to Wednesday night’s contest in hopes of finally getting win in Ole Miss’ column.

The Rebels have come close, with the averaging margin of victory for Middle Tennessee (4-0) only being 8.6 points in the three games.

“In the past (when) we’ve played them I get so up for the game. You want to win the game like every game,” Insell said. “Sometimes I guess when I get really amped for a game it makes our players tight. That’s something for me as a coach, I’ve learned a lot about this team is keep it level-headed. Middle Tennessee is just another game.”

Ole Miss (5-1) is coming off a road win in Philadelphia against Temple last Saturday. It was the first true road win of season for the Rebels after getting a neutral site win over Delaware State in Chicago on Nov. 18.

After suffering their fist loss of the year against Saint Louis in Chicago the night prior, Insell and his staff viewed it as a valuable experience. The experience helped them find success against Temple in a similar environment a week later.

“We learned a lot after the Saint Louis game,” Insell said. “We learned a lot as players, we learned a lot as coaches. It was kind of a gut check reality thing that, ‘OK, we gotta go back to our fundamentals. We can’t take things for granted.’ We changed some things about how we did the road trip to Temple. It worked. …I just felt like our kids handled it.”