‘We’ve got to play with an edge’: Ole Miss’ rally too little, too late in loss to South Dakota State 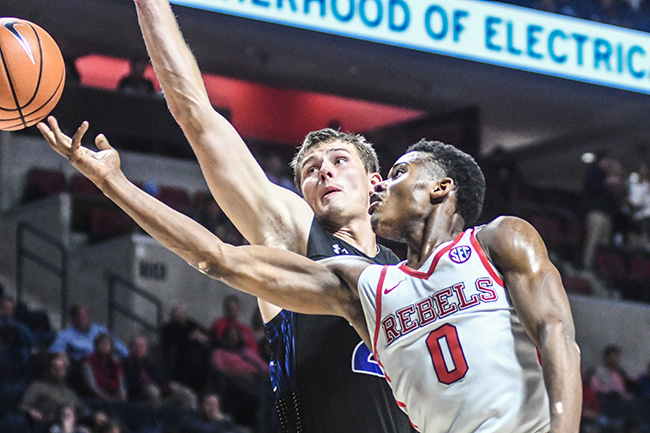 Ole Miss didn’t play much defense early, so South Dakota State kept shooting. The Jackrabbits made a lot more than they missed.

So one of the country’s top mid-majors led by 23 points late in the first half Tuesday at The Pavilion, which made it hard for Ole Miss coach Andy Kennedy to believe his team had a chance to win nearly an hour later.

Ole Miss mounted a furious rally, but all that expended energy took its toll late as the Rebels fell to South Dakota State 99-97 in overtime Tuesday at The Pavilion. The Rebels overcame a 20-point halftime deficit just to give themselves a chance but couldn’t survive in extra time without Terence Davis, who scored a team-high 22 points before fouling out with 1:18 left in regulation.

Deandre Burnett, Markel Crawford and freshman Devontae Shuler each added 19 points for the Rebels (4-2), but the Jackrabbits’ combination of big man Mike Daum and barrage of 3-pointers proved to be too much. Daum, a 6-foot-9 NBA prospect, finished with a game-high 26 points and seven rebounds before fouling out early in overtime.

Daum knocked down six 3-pointers while the Jackrabbits’ final one came from Reed Tellinghuisen to put SDSU (7-2) ahead for good with 1:39 remaining. SDSU, the reigning Summit League champion whose only losses this season are to No. 2 Kansas and Wyoming, put up 41 3-pointers and made 18 of them — seven more than Ole Miss had allowed in any game this season.

David Jenkins Jr. added 22 points for SDSU and scored the Jackrabbits’ final six. He hit a mid-range jumper with the shot clock running down to extend SDSU’s lead to 99-96 with 13 seconds left. Forward Bruce Stevens got free near the top of the key for a potential tying look from 3 but couldn’t connect, and a free throw from Justas Furmanavicius was all the Rebels mustered in the final 10 seconds.

“(Stevens) had a clean look,” Kennedy said. “Unfortunately for us, we didn’t make enough of those.”

The Jackrabbits knocked down five of their last seven shots from the field and shot better than 47 percent for the game. Ole Miss shot 50 percent from the floor but expended a bunch of energy chipping away at SDSU’s lead after shooting just 36 percent in the first half and starting 1 of 15 from 3-point range.

Kennedy credited SDSU’s drive-and-kick offense for some of the clean looks the Jackrabbits got from 3. But he added there wasn’t enough of a sense of urgency from his players to guard the perimeter.

“Our awareness and the urgency of now, I just don’t feel it,” Kennedy said. “We tried to warn them that, ‘Hey, South Dakota State’s good. If you let them turn that ball, they’re going to get open looks and they’re going to make shots.’ And wow did they make shots.”

SDSU knocked down 11 of their 3s in the first half as the Jackrabbits led by as many as 23 on the way to a 55-35 halftime lead. Davis served as the catalyst to get the Rebels back in it.

Ole Miss’ leading scorer poured in 20 of his points in the second half, including seven in span of 1 minutes, 31 seconds to give the Rebels their first lead at 78-76 with 4:37 left. Both teams hit rare scoring lulls the rest of way with SDSU holding for the final shot in 82-all game, but Jenkins’ 3 clanged off the side of the rim as time expired before he took over late in overtime to help the Jackrabbits claim their second victory over a Power Five team (Iowa) this season.

Meanwhile, the Rebels lost out on a chance to pick up a win that might’ve carried some weight later in the season as it pertains to their postseason resume. Ole Miss’ next chance to do that comes back at The Pavilion on Saturday with a 1 p.m. tip against Virginia Tech, an NCAA Tournament team from a season ago that improved to 6-1 with a 24-point win over Iowa on Tuesday.

But Kennedy said the intensity from his team has to be there from the start if it’s going to give itself any realistic chance at notching that kind of victory.