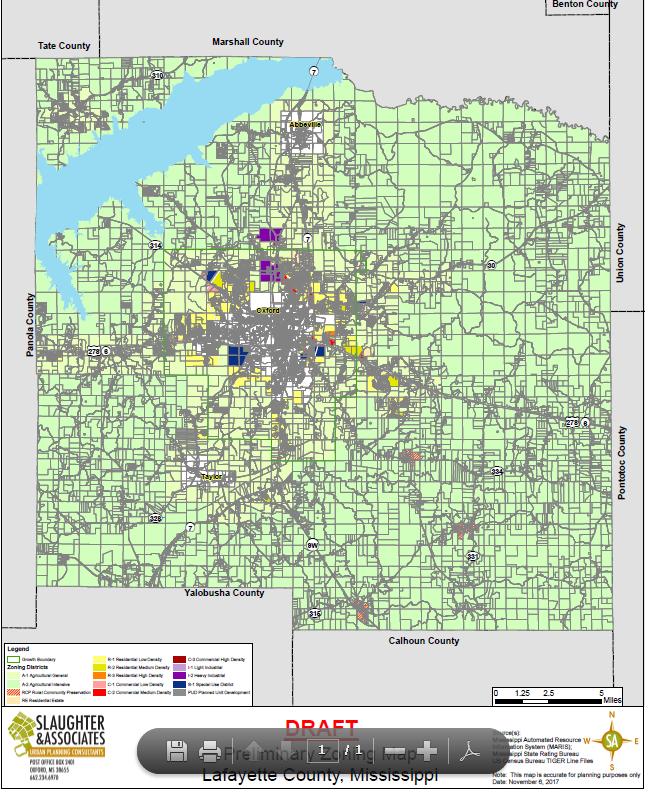 In years past, just mentioning the “Z” word at a public hearing packed the meetings of the Lafayette County Board of Supervisors with disgruntled citizens who did not want anyone telling them what they could or couldn’t do with their land.

However, as the county is growing, many residents are finding themselves becoming neighbors with commercial businesses or large subdivisions. Since there are no zoning regulations, planners had little to work with to prevent anyone from building just about anything wherever they wanted.

At Monday night’s Lafayette County Planning Commission, one of several public hearings was held on the proposed zoning ordinance and only one person stood to ask a couple of questions about the zoning map and possible restrictions.

The zoning ordinance divides the county into zoning groups, that have the most restrictions closest to Oxford city limits, and fewer restrictions in the more rural areas of the county. The districts would include: Agricultural, Rural Community Preservation District, Residential Estate, Residential Low-, Medium- and High-Density districts, Planned Unit Developments for mixed-use developments, Commercial Low, Medium and High districts, Industrial – light and heavy districts and Special Use Districts.

“As we sit here tonight, we don’t have an ordinance or teeth for county leaders to turn a project down outright,” said Mike Slaughter, with Slaughter & Associations, the planning group hired by the Board of Supervisors to update the county’s Comprehensive Plan and create the zoning ordinance. “Once this is adopted, they’ll have the ability to say whether a project is being planned in the appropriate place. It will protect you from some uses going into that area.”

If the zoning ordinance is passed, any commercial uses proposed would have to come before the planning commission for approval in many of the zoning districts.

There have been several public meetings held in the last two weeks around the county. Tonight, a public meeting is scheduled for 6 p.m. at the College Hill Community Center.

Another public hearing will be held on Dec. 4 before the Board of Supervisors considers taking up the matter for a vote.

The complete proposed zoning ordinance can be viewed online at wwwlafayettems.com.

In other business Monday, the planning commission: