What is Matt Luke’s most pressing concern as Ole Miss’ coach? 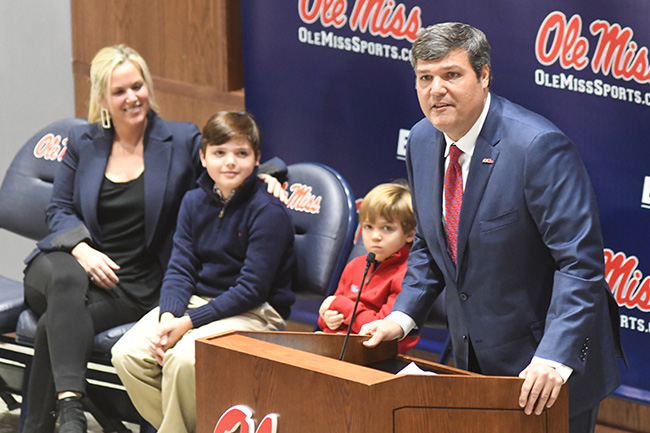 Matt Luke speaks after being introduced as the new head coach at the University of Mississippi during a press conference at the Manning Center, in Oxford, Miss. on Monday, November 27, 2017. (Bruce Newman, Oxford Eagle via AP)

He talked about changing the culture. He hit on taking complete inventory of the program. He brought up his nearly two decades of experience coaching college football and how he believed spending most of that time at Ole Miss turned him into the right man for the job.

Even as Luke spoke at an introductory press conference Monday after having his interim tag removed, his nine on-field assistants were on the road with the recruiting season’s contact period starting 24 hours earlier. Luke joined them on the trail later in the day.

“Recruiting is the lifeblood of any program,” Luke said. “We all know that, and I’m looking forward to sharing this blue-collar, hard-working vision with the players of this country and this state.”

Luke and his staff can’t afford to waste any time with the sport’s first early signing period set to begin Dec. 20, and there’s plenty of work to do. Ole Miss has 11 verbal commitments in a 2018 class that’s ranked 75th nationally in 247Sports’ composite rankings and has limited spots available because of the scholarship restrictions stemming from the NCAA’s long-running investigation into the program, though a small senior class will help the Rebels’ numbers.

Nine of the Rebels’ pledges are on the defensive side of the ball. That includes four defensive tackles, two linebackers, one end and two cornerbacks, including the Rebels’ most recent commitment in three-star Florida corner Keidron Smith.

Ole Miss has had success going out of state to lure talent in recent years, plucking Robert Nkemdiche, Laquon Treadwell and Laremy Tunsil out of Georgia, Illinois and Florida, respectively, as the five-star headliners of the 2013 class. Quarterback Shea Patterson, another former five-star prospect, is from Louisiana, linebacker DeMarquis Gates — Ole Miss’ leading tackler the last two seasons — came from Georgia, and receiver DaMarkus Lodge and offensive tackle Greg Little, a five-star signee, hail from Texas.

But Luke, a Mississippi native who’s spent 14 years as a player or coach at Ole Miss, said the emphasis will continue to be working from the inside out as he tries to replenish the Rebels’ roster.

“I think because of the Ole Miss brand being stronger now than ever, we can go into a lot of places that maybe we couldn’t before,” he said. “You’ll go a lot of different places now and see Ole Miss shirts that you couldn’t do that before. But it does all start with Missiissippi. That’s where it starts and then we’ll branch out from there.”

The uncertainty of what other sanctions could be coming is making things tricky for Luke and his staff. The school is still awaiting the Committee on Infractions’ final ruling on a case that has Ole Miss staring at 21 alleged rules violations with 15 of them being Level-I, or the most serious, charges.

“(The recruits) are waiting to see what happens,” Luke said. “But there is a lot of interest, and we’re going to be right there either way.”

Why did Ole Miss hire Matt Luke after a…