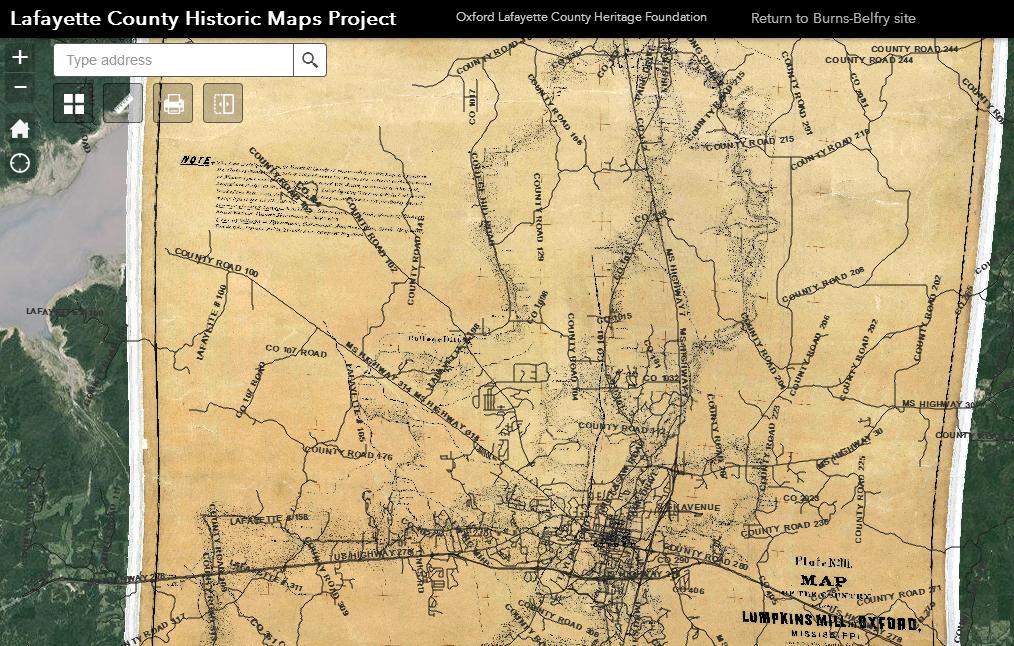 The Heritage Maps Project allows users to layer maps to compare how Lafayette County looked in the late 1800s compared to today. This is example using the 1862 Chicasaw Map with today's road map layered on top. The maps can be viewed at www.burns-belfry.com.

Since Lafayette County was born in 1835, the lay of the land has undergone great changes, from mostly forest to the rise and fall of the railroad to paved roads and eventually highways.

Thanks to the work of the Oxford-Lafayette County Heritage Foundation, people can now view how the county has changed over the last 180 years and how it compares to how it looks today.

The online Lafayette County Historic Maps Project involves the digitization, rectification and digital display of historic maps using online software. The maps date from 1835 to present day and are fully interactive and users can overlay the laps on top of each other for comparison.

“You can view the original government survey map from when they received the land in Lafayette County from the Choctaw Indians and then overlay today’s roadmaps over that,” said Richard Burnette, president of Heritage Foundation. “There are trails marked on the map where there are County Roads today.”

Burnette said the project began about four years ago, shortly after the Burns-Belfry Museum and Multicultural Center was complete.

“I was out walking with Will Lewis and we were talking about what might have been located in the area were standing in back in the day, and I said, ‘Wouldn’t it be great if we could look down on our phones and see a map from that era?'” Burnette said.

The Heritage Foundation agreed to take on Burnette’s map idea as its new project.

“Largely through internet research, I discovered about 250 maps that show Lafayette County at various years from the last 1840s to present day,” he said. “Some are more detailed than others, and those became the ones we wished to get online first.”

Maps available to view currently include a map of the current roadways, the 1835 Chickasaw map, the 1862 Lumpkin Mill map, the 1895 Oxford Sanborn/University map; the 1912 soil map, the 1930 Census Map and several topographical maps from the early 1940s.

Burnette said more maps will be added to the website soon.

“We’re having a meeting (today) to decide which ones we’ll add next,” he said Wednesday.

Burnette said the Historic Maps Project is a joint effort with the Heritage Foundation working with The Slavery Research Group, the UM Center for Archaeological Research, the city of Oxford and the UM Geoinformatics Center.

“Some of these maps were only recently discovered and made available to us, so we are excited about sharing these with the broader university and Oxford-Lafayette communities,” said Jeffrey Jackson, associate professor of sociology and co-chair of the Slavery Research Group.

Using the online maps, Burnette said as recently as this week, he was able to find an area near Enid that was once a Union general’s headquarters, overlooking the Profit Bridge.

“We found some evidence of massive fortifications,” he said. “There’s no question we were in the right spot.”

Burnette said future plans, other than adding additional maps, will be adding the ability to allow people to link photographs or scanned letters to the maps.

“For example, the College Hill Presbyterian Church, maybe someone’s parents or grandparents were married there and they can attach a photo to that area of the map,” he said. “The maps are the base, and we’ll keep adding to it from there, like a Christmas tree.

The Historic Map Project can be viewed online at www.burns-belfry.com.