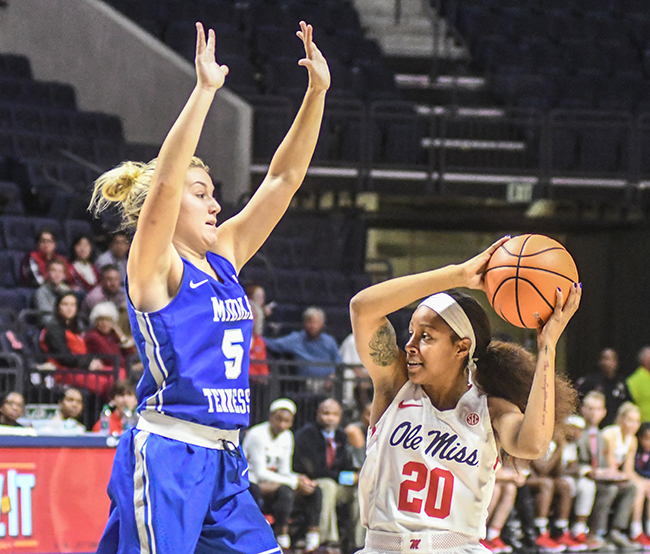 On Wednesday morning Matt Insell told a friend on the phone that later that evening it was going to be like he was having a ‘root canal.’

Midway through Ole Miss’ game against Middle Tennessee State Insell felt like he had his ‘wisdom teeth cut out, too.’

The nightmarish visit to the dentist subsided as the Rebels overcame a 12-point first half deficit and rallied to defeat Middle Tennessee 65-56 at the Pavilion at Ole Miss.

“It was a gutsy performance,” Insell said. “When you play a first quarter, really the first half, offensively where we just didn’t have anything going at all. We got a little timid there offensively. I was so proud of our team. Every adjustment we asked them to make at halftime they made it.”

Ole Miss shot a porous 28 percent from the field (5-of-23) in the first half. The only positive was shooting 7-of-9 from the free throw line, where nearly half of their 17 points came from in the first 20 minutes.

Middle Tennessee took a 26-17 into the locker rooms after shooting 41 percent in the second quarter.

The second half was a much different story for the younger Insell and his team. The Rebels came out of halftime, outscoring Middle Tennessee 29-11 in the third quarter. They took their first lead of the game at the 4:58 mark of the third after Alissa Alston nailed a couple of free throws to go up 29-28.

“We came out in the second half and just battled through,” Insell said. “We just beat a real, real good basketball team. We let them get in our head a little bit. In the second quarter I just told them to ‘guard. We’ll figure the offense out. Just guard.’ …the third quarter we just lit it up.”

Insell may be without a key player for the foreseeable future.

Preseason All-SEC guard Shandricka Sessom injured her leg early in the game after coming down on it hard when a player ran under her while contesting a shot. Sessom tried to get back up under her own power but went back to the floor after. She was helped to the locker room by trainers and did not return.

There was not a preliminary report given and Insell said he would know more Thursday morning. Sessom is averaging 17.7 points per game.

“It’s kind of a freak play but it’s a play that happens to her a lot,” Insell said. “I feel bad for that kid. She’s such a great kid. She’ll be back good as new.”

Lewis came in to replace the injured Sessom and played 26 minutes. She had only been averaging just under 15 minutes a game prior to Wednesday night.

What is Matt Luke’s most pressing concern as Ole…