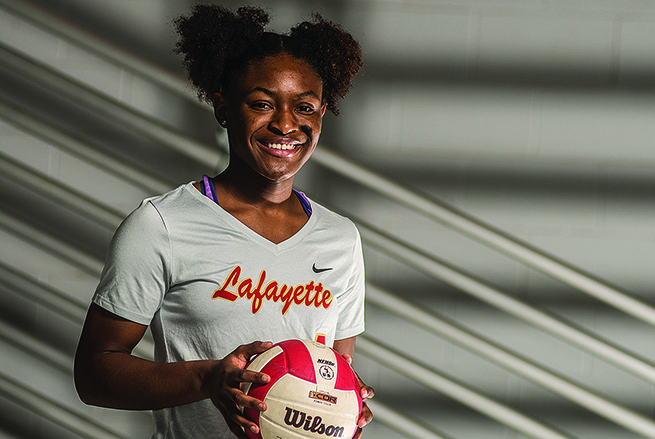 Returning to the volleyball court after a year away helped Lafayette’s Xhiir Burgess mature and improve her game. (Bruce Newman)

When Xhiir Burgess walked away from the sport after her freshman year it ate at her.

It bothered her so much that she could not even bring herself to attend but only a few matches the following season.

A decision to not play softball and to return to the volleyball court proved to be wise for Lafayette as a team and for her.

A dominant junior season at the net earned Burgess her first EAGLE Player of the Year honor.

Burgess played in middle school and her ninth grade year, where she earned some varsity time. When she rejoined the team this summer after sitting out her sophomore year, she realized it would not be like riding a bike.

“It was hard. I had to re-learn everything,” Burgess said. “A year from it, it was like everybody had that extra year to get better. I had to get better from the year coming back.”

It was more than remembering the mechanics of volleyball for Burgess.

During her time away she continued to play basketball and run track, but every sport is different. Volleyball is no exception, no matter how well-conditioned the athlete might be.

That first preseason practice in the summer is when Burgess learned that first hand.

“I had pains because I wasn’t used to it,” Burgess said. “So, I had to get used to that. The movement and jumping and swinging. It’s a lot more pressure on your knees and more work on your shoulder.”

Once she got her body in playing shape Burgess began to see success on the court.

Her freshman season was not one of statistical value but it was valuable for Burgess nonetheless. Playing at the varsity level then walking away and then returning showed Lafayette head coach Clint Jordan a more improved player in every aspect.

Burgess had one of the state’s best seasons statistically. She finished with a team-high 205 kills, putting her in the top-35 in Mississippi. Her average of 2.6 kills per set was good for 22nd best among the state’s top players.

Burgess was also a force defensively. She racked up 132 blocks to lead Lafayette and was the state’s top blocker.

The confidence level is high for Burgess who will be returning with an experienced team and looking to go further than a quarterfinal round exit in Class II playoffs next season.

Lafayette
Burgess was not the only Commodore to find success at the net this year.

Her good teammate ­— and good friend — Mariah Holland fed off of Burgess and it earned her a spot on this season’s EAGLE All-Area team.

Right behind Burgess on the block list was Holland with 132, putting as the second-best in the state.

It was a pair that was tough for opposing teams to get the ball through when they were on.

They helped fill the void that Orianna Shaw left when she graduated after the 2016 season.

“I knew they could do it. I didn’t know they would do it this well and this quickly,” Jordan said of the pair’s season. “Orianna’s a special player. I don’t know if I’ll ever have another Orianna and I don’t ask these girls to be like Orianna. But, we have the same expectation to get your hands on everything you can. …I knew how athletic both of them were, especially Xhiir. I knew the potential and they met that potential pretty quickly.”

Holland finished just behind Burgess in kills with 199.

Oxford
Coming off a state championship and going the growing pains of losing key players and learning a new head coach created an interesting year for the Chargers’ first season in Class III.

First-year head coach Kacie Hengler had weapons at her disposal and two of them landed on the All-Area team.

Representing Oxford this season are Jordan Freeze and Grace Joyce.

Freeze was tasked with trying to replace the production Hobson left behind after graduating. For the most part she met those expectations, recording a team-high 221 kills. The senior also had 23 blocks and finished second on the team with 187.

“Jordan has great volleyball IQ and was a chief asset to the team because she can play just about any position,” Hengler said. “Being such a well-rounded player gave me many options for our offense.”

“Grace has an incredible work ethic,” Hengler said. “She is a very consistent hitter, and by the end of the season, she was the one we would find to get the ball to when we needed to put it away.”

Water Valley
The Blue Devils had a successful season, making it one match away from reaching the semifinals at Mississippi State.

Higdon had a team-high 78 digs to go with her 42 aces and eight kills.

“Hannah and Lillian are two players every coach looks forward to coaching,” Water Valley head coach Allison McCain said. “Both work 100 percent to ensure they are doing their very best along with their teammates, as well as being great leaders. We look forward to having Lillian come back her junior  year and be a leader as well as a force on the net. As for Hannah, she is a valuable asset that will be hard to replace.”