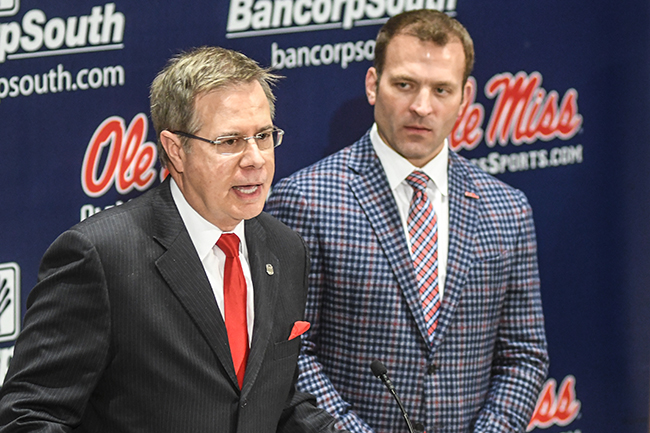 Ole Miss is holding a press conference today at 1 p.m. to address the NCAA probation handed down.

Already, however, Ole Miss Chancellor Jeff Vitter has released a statement to university alumni, saying that there will be a “vigorous” appeal of the 2018 postseason ban.

“Today, the NCAA’s Committee on Infractions issued its report to the University of Mississippi regarding the NCAA investigation of the football program. In the report, the committee disagreed with the institution’s position on most of the contested allegations. In addition to accepting our previously self-imposed sanctions, the committee has imposed a postseason ban for 2018.

“While we continue to review the full report, we will vigorously appeal the 2018 postseason ban. The additional postseason ban is excessive and does not take into account the corrective actions that we have made in personnel, structure, policies and processes to address the issues.

“Vice Chancellor for Athletics Ross Bjork and I will be available to the media at 1 p.m. CT in the Burns Team Meeting Room in the Manning Center to discuss the Committee’s findings.

Below is the full press release from the NCAA regarding penalties against Ole Miss. The NCAA said Ole Miss lacked institutional control.

“The University of Mississippi lacked institutional control and fostered an unconstrained culture of booster involvement in football recruiting, according to a Division I Committee on Infractions panel. Six football staff members and 12 boosters were involved in the violations, which included the provision of approximately $37,000 to prospects through cash payments, the use of automobiles, lodging, transportation, meals and apparel. Two staff members also helped arrange fraudulent standardized test scores for three prospects.

“The panel found the involved head coach failed to monitor the program, allowing his staff to knowingly commit a series of recruiting violations, submit false information on recruiting paperwork and not report known violations.

“The panel noted that the case was the result of a culture at the university where rules violations were acceptable in the football program and reminiscent of similar Ole Miss infractions cases in the past.

“’This is now the third case over three decades that has involved the boosters and football program,’ the panel stated in its decision. ‘Even the head coach acknowledged that upon coming to Mississippi, he was surprised by the ‘craziness’ of boosters trying to insert themselves into his program.’

“Members of the football coaching staff knowingly committed recruiting violations and arranged for impermissible booster contact and involvement. Specifically, the assistant athletics director acted unethically when he arranged for boosters to provide prospects between $13,000 and $15,600 in cash payments, including $10,000 to one prospect, as well as lodging, meals and transportation. In addition, the assistant athletics director provided false and misleading information during his interview. An assistant coach and operations coordinator also acted unethically when they arranged the fraudulent ACT scores and arranged for a booster to provide housing and transportation to five prospects while they completed the necessary academic work to become eligible for competition. The assistant coach acted unethically and compromised the integrity of the investigation. The operations coordinator provided false and misleading information on multiple occasions during the investigation.

“Penalties and corrective actions imposed by the panel include: