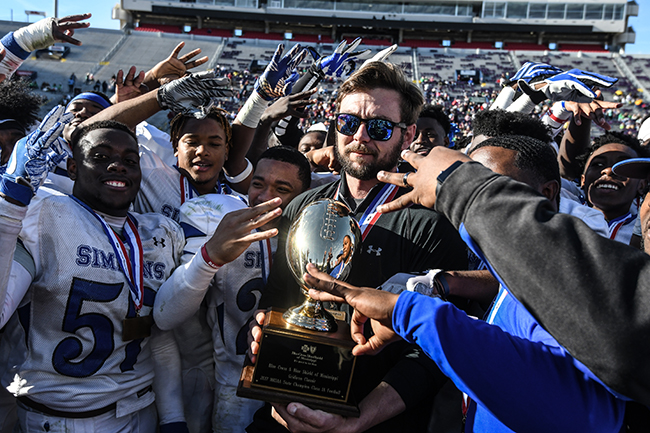 First-year head coach Wade Tackett had to find a way to motivate his team. Two consecutive state titles and a dominant winning-streak would not be enough.

He chose to question his seniors’ legacy and what they would leave behind at Simmons.

The strategy paid off as Simmons rallied from 14 points down to defeat Nanih Waiya 22-20 in the MHSAA Class 1A state championship at Vaught-Hemingway Stadium on Friday afternoon.

It is the program’s 40th consecutive win and the state’s longest running winning streak.

“This group of seniors they have a legacy and that’s what I told them all year. ‘What’s your legacy going to be?’ Tackett said. “They had already won state titles. I had to feed them something to keep them hungry. I had to get them to nibble on something.”

The winning streak was on the ropes midway through Friday’s game after Nanih Waiya came out and jumped out to a 14-0 lead at halftime.

Neither team was really able to find momentum as penalties marred the flow of the game. A total 13 penalties for 77 yards were called in the first half with many of them being pre-snap infractions. Simmons was hit with multiple false start penalties.

“It affected play-calling,” Tackett said of the flags. “It bled over to the defensive side of the ball I felt like. At halftime we had a gut-check. We came back out and they executed the way they promised they would.”

Simmons’ Marquez Pam and Demarius Turner provided the spark that mounted the comeback. The duo combined for 247 yards and three touchdowns on 40 carries. All three touchdowns came in the second half.

Pam put the Blue Devils (15-0) on the board with a five-yard run early in the third quarter. A failed two-point try made it a 14-6 Nanih Waiya lead.

Turner did the rest of the work, including a 43-yard touchdown run to cut the Warriors’ lead 20-14 with 6:26 remaining. Turner then scored on a four-yard run to tie the game and Simmons took their first lead of the game with 1:32 left after Pam converted the two-point try.

“It’s the best feeling ever,” Turner said after the game. “It means a lot. I’m glad I’m able to pull it off for my team.”

Chris Smith and  Taemaus Glass provided the scoring for Nanih Waiya (15-1). Smith caught a 16-yard pass from Bryce Stanton for the first score of the day and then had a 19-yard run in the third quarter for the Warriors’ final points of the game. Glass had a 24-yard rushing touchdown in the second quarter.