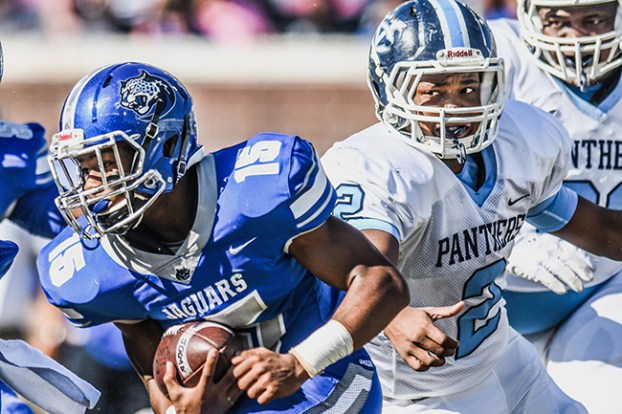 It was a long road to get to Saturday afternoon but Lane Mancuso is grateful for every step of the way.

The Jefferson Davis County head coach led his team the Class 3A state football championship with a 36-7 win over Yazoo County inside Vaught-Hemingway Stadium.

It is the first year of the program’s existence after Prentiss and 2A powerhouse Bassfield consolidated into Jefferson Davis County this year.

“If I had to say one thing is it’s just been healing,” Mancuso said. “I think this is going to go a long way for us as a county. It’s no more Bassfield and Prentiss. It’s Jeff Davis County and I think they showed that today. They wanted to make sure they went out on a high note.”

The game had a weird tone to start off as Jefferson Davis County kicked the opening kickoff out of bound three straight times. The fourth attempt stayed in bounds but Yazoo County’s Devarrio Sanders took it back 66-yards for Panthers only score of the game.

“It just goes to show the maturity of this football team and what they’ve gone through,” Mancuso said of how his team handled the start. “That’s nothing compared to what these kids have been through all year. I didn’t have a doubt in my mind that they were going to come back and give a great effort.”

For Yazoo County quarterback — and Mr. Football for Class 3A — Kenny Gainwell, Saturday was a day to forget. the senior completed five of 11 passes for only 25 yards. He was pressured all day by the Jaguar defense, getting sacked four times. Gainwell ran for 13 yards on 10 carries.

The Panthers did not record a first down until midway into the second quarter and finished the game with 64 total yards of offense compared to Jefferson Davis’ 381.

Yazoo County running back Cherokee Adams was held to 28 yards on five carries.

“Our defense has been the backbone of our football team,” Mancuso said. “Our defensive coaches have done a tremendous job all year. It may be surprising to a lot of people but it’s not surprising to us.”

Ole Miss quarterback Shea Patterson could be on the move. The school has given Patterson permission to explore a transfer... read more