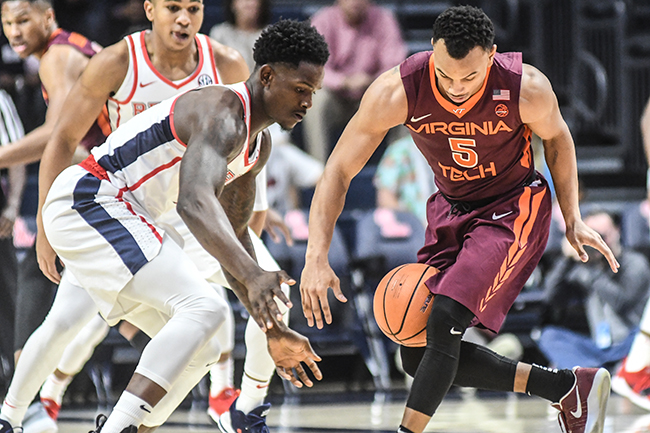 Slow starts have plagued Ole Miss throughout the early part of the season. On Saturday, the problem was finishing.

The Rebels gave up 54 points after halftime and squandered some chances late, falling to Virginia Tech 83-30 in overtime at The Pavilion. Ole Miss missed five of its final seven shots from the field in its second straight overtime loss.

“At the end of the day, you’ve got to make plays,” Ole Miss coach Andy Kennedy said.

Ole Miss (4-3) led for nearly 39 minutes until Justin Robinson hit a 3-pointer to put the Hokies (7-1) up 70-68 with 1:02 left in regulation. The Rebels trailed by four with 11 seconds to go but got a basket, a steal by Terence Davis and a layup from Markel Crawford to force extra time.

The teams went back and forth in overtime with Virginia Tech leading 71-68 with 1:58 left. Bruce Stevens missed a potential tying 3 on Ole Miss’ next possession, and Davis misfired on another chance to tie it from the top of the key with 7 ticks left. Devin Wilson missed a pair of free throws to give the Rebels one last chance to draw even after a timeout, but Breein Tyree’s desperation 3 at the buzzer was well off the mark as the Rebels lost out on a chance at their first top-50 KenPom victory.

Davis and Tyree paced Ole Miss with 17 points apiece while Markel Crawford and Deandre Burnett added 13 and 11, respectively. Kevin Blackshear had 17 points while Chris Clarke added 16 points to lead Virginia Tech, but neither team helped itself much from the free-throw line.

The Hokies shot 70 percent from the charity stripe while Ole Miss made just 54 percent of its freebies, though Virginia Tech shot 13 more free throws (37) than Ole Miss (24). Dominik Olejniczak and Marcanvis Hymon each fouled out while Davis and Tyree finished with four fouls apiece.

“They just started putting their head down and driving us to the basket, and with our inability to keep them in front of us, they end up making more free throws than we attempt,” Kennedy said.

Virginia Tech came in averaging 98 points but had just 29 at the half — the fewest for the Hokies in a half this season — as the Rebels took a 10-cushion into the locker room. Ole Miss stretched the lead to as many as 16 with 18 minutes left in regulation before Virginia Tech went on a 16-3 run to get within single digits before eventually catching up.

Ole Miss cooled off after halftime as the Hokies turned up the defensive pressure, shooting just 39 percent from the field in the second half and making just two of its last 16 3-point shots. Virginia Tech shot 50 percent in the final 20 minutes after making just 35 percent of its shots in the first half. Ole Miss got off 10 more shots than Virginia Tech in the first half by forcing the Hokies into 10 turnovers, but the Hokies committed just four the rest of the way.

Ole Miss will hit the road next Saturday to take on Middle Tennessee State (86), another team in the KenPom top 100. It’s another quality opportunity for the Rebels.

“They’re all big,” Kennedy said. “As I look back at it, you don’t think you overschedule when you schedule, but maybe we did. Maybe we’re not ready for all of this. But we’ve got a lot of opportunities.”