2017 ALL-AREA FOOTBALL TEAM: Wilfawn proves 2016 was not a fluke with another dominant season 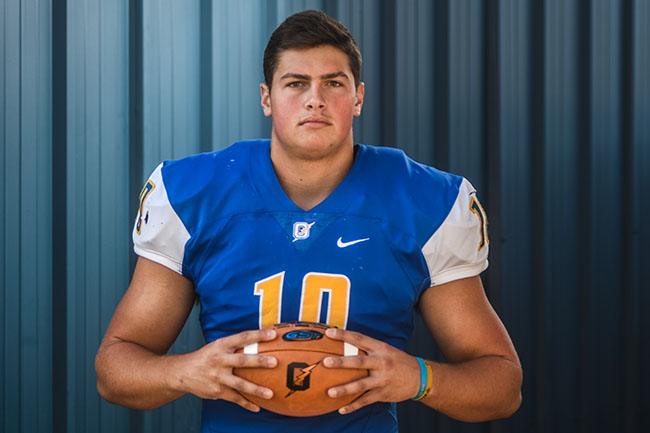 In 2015 Quentin Wilfawn nearly had what he loved taken away from him.

Midway through his sophomore season Wilfawn injured his neck in turned out to be a bone spur.

One doctor said Wilfawn’s career was over, but after getting a second opinion the injury was not as career threatening as originally diagnosed.

“(The doctor) said ‘it’s just a bone spur and it’s not even that big to where we need to shave it down,’’’ Wilfawn recalled. “He said ‘you may feel the pain every once in awhile but you’re not at risk.’”

That was all Wilfawn needed to hear.

After recording 32 tackles in six games during the 2015 season the Oxford linebacker went on a tear his final two years, earning him the 2017 EAGLE Player of the Year.

“We knew when he was young was going to be a good football player for us,” Oxford head coach Chris Cutcliffe said. “He was really competing for a starting job as a tenth-grader. The injury happens and he’s got to sit out that year. Obviously any kind of injury dealing with the neck is a pretty scary situation. …thankfully he was OK.”

Once fully recovered from his injury Wilfawn returned in 2016 and with a full year under his belt wreaked havoc against opposing offenses. He tallied 171 tackles, putting in a tie with third best in the state with Hazelhurst’s Tim Steward — only eight tackles shy from tying state leader Patrick Harris of Hazelhurst.

Going from relative unknown to one of the best in the state was an accomplishment Wilfawn was proud of, but it did not come free of doubt from others. He heard people saying it was a ‘fluke’ or that it was a flash in the pan kind of season.

That put a chip on Wilfawn’s shoulder. Entering his senior year he made a goal for himself of getting 200 tackles, not only hit a career milestone but to also silence those doubters.

“I just wanted to prove that (2016) wasn’t just a one time thing,” Wilfawn said. “It wasn’t just me getting lucky for one season. I wanted to show that I could do it throughout multiple seasons.”

2017 did not pan out how Wilfawn, nor the team, hoped it would in the Chargers’ first season in 6A. Oxford was unable to reach the playoffs and Wilfawn fell short of his goal with 169 tackles. It was still good enough to finish 15th best in Mississippi.

Along with tracking down running backs and receivers Wilfawn also found himself in opposing teams backfield, recording 4.5 sacks this season — two more than he had in 2016.

“The way we study film and we practice it everyday, so we have an idea of what they’re doing,” Wilfawn said of seemingly knowing where the football is at all times. “You just see the play and you just know, ‘hey, just go make the play.’”

Memphis has been talking with Wilfawn as well, keeping in touch with each other several days a week. He has also visited other schools.

Wifawn was a part of a defense that stifled opponents in 2017. The Chargers held teams to 11.8 points a game, shutting out three and holding four others to seven points or less. Another key part of the Charger defense was C.J. Terrell.

Terrell finished with 66 tackles but his main threat was picking off the football and taking it to the end zone. He tied with Damarion Parham for a team-leading six interceptions and returned one for a touchdown.

Offensively, J.J. Pegues makes the team with a team-high 452 receiving yards to go with three touchdowns. Offensive lineman Ryan Lipscomb, Will Hollingsworth and Anthony Boudreaux round out the Chargers’ on this year’s team.

Grey Jenkins finds his way on the special teams slot. The senior averaged 35 yards a punt with 60 punts totaling 2,129 yards.

2017 was a turnaround season for the Blue Devils. After going 2-9 last year they went 8-4 and finished second in the region with a 4-1 record.

Senior Ty Varner saved his best season for last at Water Valley. The quarterback threw for 1,550 yards and 16 touchdowns while nearly have a 50 percent completion average, completing 80 of 162 passes.

The ground game was just as lethal for Water Valley with Trenderrious Brock and Kenterrious Rucker pacing the way. Brock was on pace for a season that would have rivaled 2016’s player of the year in Lafayette’s Jamarcus Quarles but an injury sidelined him late in the season. Brock still finished with 736 yards and 15 touchdowns on 95 carries.

When Brock went down Rucker stepped in, rushing for 1,038 yards and 12 touchdowns on 163 carries.

Coming off a state championship season it was tough sledding for the Commodores in 2017.