Ancient myths can find a place in modern gardens 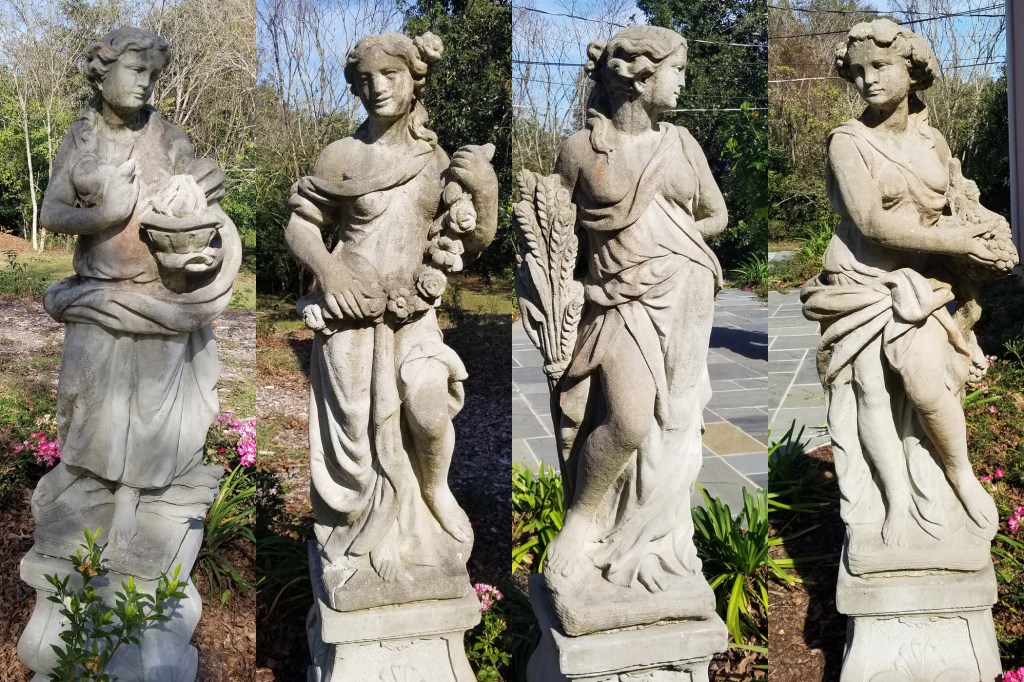 Even today, many gardeners enjoy myths of the past, such as these statues of the Goddesses of the Four Seasons; Winter, Spring, Summer, and Autumn. (Photos by MSU Extension/Gary Bachman)

Celebrating Thanksgiving with family and friends got me thinking about traditions and beliefs, some popular in the distant past but gone by the wayside today.

In agriculture, some of the most popular myths revolve around the changing seasons.

The Southern Gardening crew just wrapped a TV segment presenting a four-season garden that featured statues of the goddesses of the four seasons. I didn’t know their backstory, so I did some research and found there are quite a few different stories and variations. Of all of them, I happen to like the Greek version best.

Before we knew about the tilt of the earth and marked the seasons by the equinoxes — or for those meteorological folks, the dates on the calendar — farmers relied heavily on the passage of the constellations in the night sky to mark the seasons. They believed that the goddesses of the four seasons controlled the movement of the constellations.

The goddess statues depict their seasons. The spring goddess is always in the presence of fresh blossoms. The goddesses of summer and autumn hold harvested wheat and fruits of the season, respectively. The goddess of winter holds no fruit and is trying to warm herself from the cold.

Perhaps better known is the story of Persephone, who was the daughter of Zeus and Demeter, the goddess of harvest and fertility. Persephone was kidnapped by Hades, god of the underworld, to be his wife. This act created much strife amongst the gods and extreme hardship for the people of the world.

To make a long story short, Zeus devised a compromise with Hades to return Persephone to Demeter. She would spend six months with Hades — the seasons of autumn and winter, during which Demeter was sad and allowed the world to be infertile. When Persephone went to Olympus to be with her mother — the spring and summer seasons — the world once again became fertile and provided bountiful harvests.

We can see how the myth of Persephone relates to our modern agriculture. Persephone is the equivalent of the seed that must be sown underground for a period of time before germinating and returning to life in the spring.

Many gardeners, myself included, are always looking for information such as when to plant particular vegetables and flowers, a certain plant’s hardiness, effects of climate change, etc. Sometimes I wonder if it would be easier to let the goddesses guide our gardening activities by the passage of the heavenly constellations.

In case you want your own goddesses, they’re available to purchase online with next day delivery.

I’m wondering how the goddesses would have handled daylight saving time.

Dr. Gary Bachman is an Extension and research professor of horticulture at the Mississippi State University Coastal Research and Extension Center in Biloxi. You can reach him at southerngardening@msstate.edu.