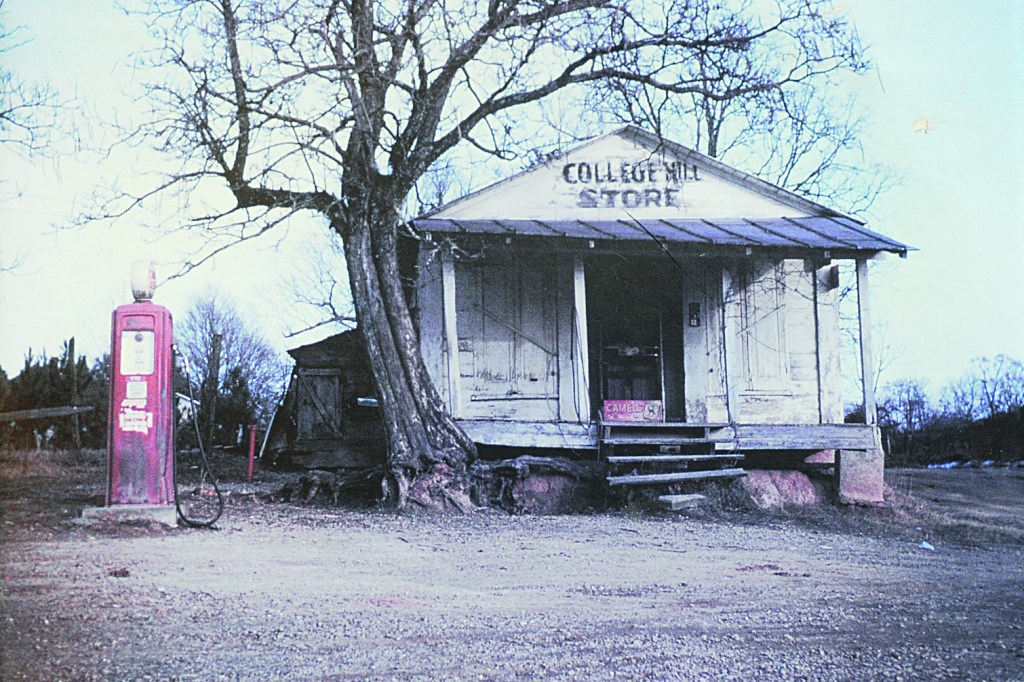 William Webb built the College Hill Store around 1847. The store was the center of the community.

Let’s turn the Lafayette County calendar back to when you could buy two store bought candles for one penny and repair an inner tube with a Rapid Vulcanizer hot-patch.

At one time the county had some 20 historical country stores where you could buy just about anything you needed – groceries, dry goods, stock feed, nails, smoking and chewing tobacco, a milking pail, even a double-bit axe, hand pumped gasoline, bulk motor oil, coal oil and too many items to mention.

Each morning before sweeping the wood floor needed sprinkling with a sawdust compound. Sneed’s Ace Hardware still carries this one of these products.

During the winter months, several semi-retired men gathered around a wood-burning pot-bellied stove where they swapped yarns about the weather, last year’s crops, next year’s planting and maybe had some heated political discussions.

In the 1920s Monroe Johnson, H.C. Franklin’s great uncle had such a store in the Tula community. This store included a small, 3rd Class Post Office.

Cliff Harwell, Clifford Earl’s grandfather, was winning bidder of $25 per month to carry the Old Dallas Star mail route. Mail was carried by horse and buggy, except when the roads were impassable.

Fleta Stanford’s father, Fred Oswalt, substituted on the Star Route. Fleta recalled, “My father would bring the mail pouch home at night and sort it, so he could get an early start during the short winter days.”

Springtime was always hectic at the post office. Shipments of day-old baby chicks would arrive from distant hatcheries. Continuous “peeping” rang throughout the post office and store until the patrons picked them up.

Tula stores purchased mostly from wholesalers in Oxford. Mule-drawn freight wagons made the round trip in two days. Some drivers camped by a good spring, forded the branch and continued to the wholesales. Others spent the night at Cook’s Rooming House.

Sitting in a tight bend along Bay Springs road, now County Road 202, was Littlejohn’s Store, built by Clark Littlejohn’s ancestors. Clark remembers in the 1940s when his father, Tyson, operated the store.

As a boy, Clark recalled, “My mother always wore the store’s key around her neck. Our house and garden were close. At slow times, she locked the store and kept busy doing other chores, always keeping an eye for customers.”

Flour and some stock feed came in colored cloth sacks. Lady customers sewed dresses from these sacks. Their next purchase might have to be a matching print — to finish their dresses.

Boys’ shirts and underwear were made from white feed sacks. Clark recalled, “I wasn’t the only boy that wore feed sack clothes.”

In the early 1950s, the store was discontinued and the family built and moved the business to its present location where Woodson Ridge Road (County Road 215) turns north from Highway 30 East.

William Webb built College Hill Store in about 1847. He fronted the store toward the Chickasaw Trail so he could depend on both foot and horse traffic. The store was long and narrow, originally a two-story structure with a doctor’s office upstairs. A fire destroyed the second floor which was never rebuilt.

The store was the center of the community, offering anything a household might need from plow lines to stick candy.

Over the years, a number of citizens owned the store. Among those were: the Blakely, Pettis, John Shaw, and Earnest Shaw families. In 1920 Judge George Galloway bought the store. After his death, his daughter, Miss Pearl, operated the store until the mid-1970s when it closed.

Earnestine Shaw shared this: “I remember several older men sitting around the wood burning pot-bellied stove, keeping it going. When thirsty, they would pitch pennies at a large designated crack in the cypress board floor. The owner of the penny farthest from the crack would have to buy the drinks.”

The building stands today as it did years and years ago. The cypress floor is original, showing numerous canning lids nailed to patch knotholes in the floor where knots loosened and fell out. It was used by Metro-Goldwyn-Mayer in 1949 as an important set location in filming Faulkner’s “Intruders in the Dust.”

Recently donated by the Galloway family to the University of Mississippi, the historical store could not stand the move. The University of Mississippi donated it to the Oxford and Lafayette County Heritage Foundation, which leased it to the Durham Family. Sisters Nita Thomas and Connie Alford, caretakers, are preserving the store in as original condition as possible, complete with Colonial Bread advertisement on the screen door. The store is available for private parties.

The Robbins took turns operating a “Rolling Store,” which was an extension of their permanent business. With a large truck, loaded from their store, they made weekly routes into the county. Corrine recalls, “Ham Fuller, as a small boy in the Riverside community, always watched for our old truck. He had pennies for some special penny candy. And housewives, short of certain recipe ingredients, depended on us.”

We have turned the calendar back some seven generations and gone is shopping in some country stores. Thanks for going with me.