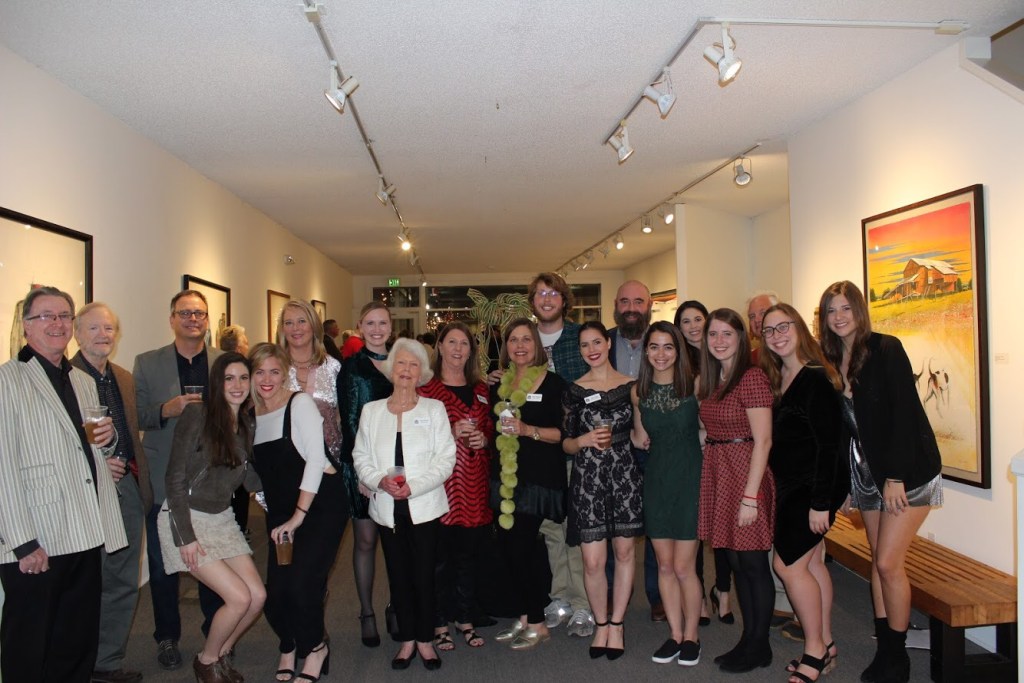 Thacker Mountain Radio Hour Board of Directors and interns kick off the Christmas season with their fifth annual membership party at Southside Gallery in Oxford. (Photo/Jennifer Lauriello)

The Square was filled with Christmas cheer on Friday night as patrons of Thacker Mountain Radio Hour kicked off the holiday season at their fifth annual membership party.

The event, which was held at Southside Gallery on the Square, included a silent auction as well as signature cocktails and hors d’oeuvres. Partygoers were encouraged to get “Thackered” while listening to the festive song stylings of house band, the Yalobushwackers.

“This is a great way to end our 20th anniversary season, and we’re so pleased with the turnout, especially our friends and members who are here supporting us tonight,” director Kate Teague said.

In addition to a night of merriment, the silent auction featured a variety of prizes meant to highlight unique aspects of Oxford and the surrounding community. Items included a guided bourbon tour for eight through some of Oxford’s most famous landmarks, a haunted dinner for 16 at Rowan Oak and pasta making lessons from Tarasque Cucina.

One prize has become a mainstay at the event: host Jim Dees’ “Tone and Tome.” Bids start at $30 and go higher than $300, with the winner receiving a custom voicemail greeting from the Thacker Host himself, and a signed copy of his latest book, “The Sound and the Fury.”

Dees says the audience is his motivation.

“I’m just always grateful to the audience, the people of Oxford who come out to the show and to events like this,” Dees said. “Because if nobody comes out, there’s no show.”

Board president Rosie McDavid is a long-time Thacker backer who says she finds inspiration in the way people come together for the annual holiday party.

“What I love is seeing such a diverse group of our community, from college students to graduate students to our older community members, to new folks in town and life-long Thacker supporters,” McDavid said. “Everybody comes together to help kick off the holiday season for such a worthy cause.”

Jack Sonni, a past Thacker performer and first-time party guest, said he preferred to sit back and take in the event.

“Thacker Mountain Radio never disappoints,” Sonni said. “This is what Oxford’s all about.”